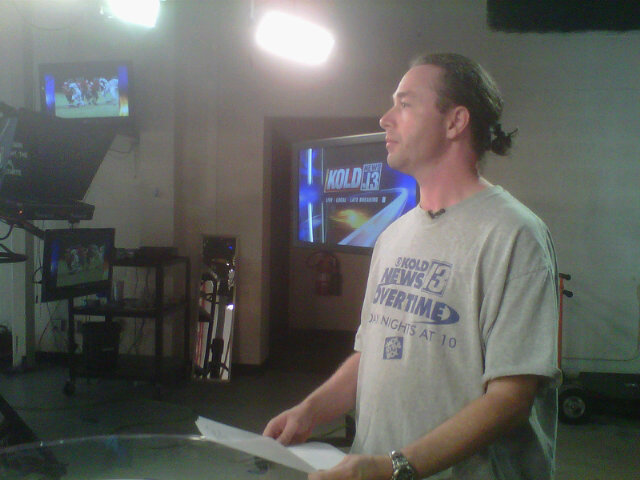 August 2010: Our production crew is rehearsing blocking camera shots with the new set and video switcher, and so we're doing some mock newscasts between shows (which are currently being done out of the newsroom until the set is ready for its debut). Guess who gets to play sports guy?

I don't know where our sports team was on this night. They were probably out shooting stories or occupied with something more important. But no matter. I was able to take a few minutes out of writing scripts to help the team. I got to read a few sports stories from the prompter, cribbed from the 6pm, in a mildly grubby t-shirt and do cross-talk with the anchors. The legendary Chuck George, our beloved meteorologist, piped in: "Is there anything you can't do?"

Well, quite a bit. But I would've liked to call a few highlights, where I could've ad-libbed lines like these:

"Coyotes on the power play in the third period. Just STUFF it in there! Arizona up 3-2."

"Arizona looking for one good throw. Just one. And... maybe next time."

"Firecracker 400. Nasty pile-up right out of the green flag. C'mon, admit it, this is why you watch."

"Second half, the Wildcats doing what they always do -- come back from behind. Slamming it in there. Man, how do those backboards stay UP?"

"32nd minute. USA up and somebody goes down. That shove here -- just flagrant. Enough with the cards. Where's the penalty box when you need it?"

"Late in the second period, let's get it on. The main event here at center ice -- and a big left hand! Oouch! You, pick up that blood!"