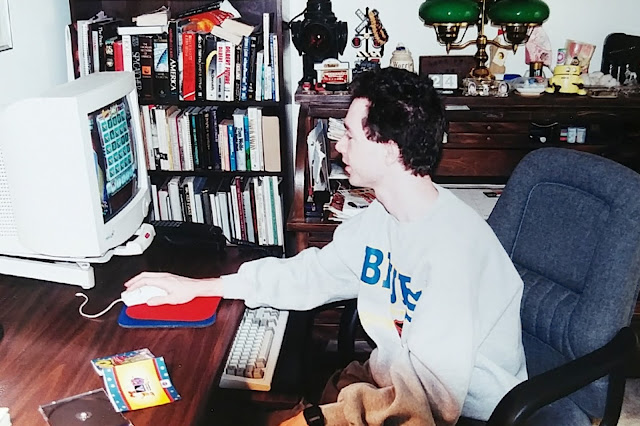 Christmas morning, circa 1997 at the family home in St. Louis. That's your servant in front of what may be an NEC multi-sync monitor playing one of his Christmas-gift games: Slingo -- a hybrid of slots and bingo. The game started out on America Online and then moved to CD. It's now an app for smartphones and such. But the CD still remains one of my most fondly-remembered games, even though I haven't played it in awhile on the PC.

I'm not sure of the state of Dad's PC at the time, but I know it was likely a home-brew 486 or a perhaps a first-generation Pentium. I know where we likely found it, though: a place called A-Z Used Computers. I remember the Royal Father and I used to go out there nearly every Saturday morning to troll for computer hardware deals. Just as your royal servant goes treasure hunting for fabric every week at the thrift stores, the key is persistence. I don't remember us buying anything more than half the time, but the journey was the reward, getting out of the house and finding comfort in familiar haunts. We had KMOX on the car radio airing "Games People Play," a weekly call-in quiz show akin to the old parlor game "Twenty Questions." We had fun.

That monitor eventually got handed down to your servant. I eventually replaced it with a bigger (and heavier) ViewSonic 19-inch display. It nearly took up the entire front-to-back length of my computer desk. A few years later, affordable LCD monitors would arrive, and I got that real estate back. I still have the Slingo CD. Perhaps it still works on Windows. I hope.
-- Christopher at 12:01 AM