Just Get It Done 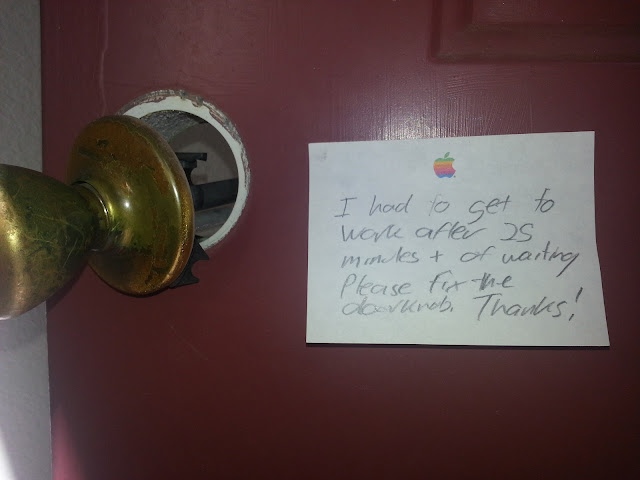 April 2014: I was leaving for work in the morning to find I was trapped in my own apartment by a broken doorknob. I made a call to the emergency maintenance line, and I waited. And waited. And waited. Finally, in exasperation and not wanting to be late, I reached for the screwdriver and rescued myself. Whenever the maintenance worker did arrive, he was greeted by a disassembled doorknob and the above note. I had the iron screen door locked to keep my valuables safe until then.

It's a real pet peeve of mine when somebody tells you they're going to do something "right away," when "right away" means half an hour from now, or more. That's a sub-peeve to the larger peeve of people telling me on the phone something will get done and it doesn't. A nightmare with American Airlines customer service back in March involving delayed luggage marked the penultimate experience. After being told that, yes, my Princess' and your servant's bags would indeed be transferred to a rebooked flight after a cancellation, it wasn't, and I spent considerable time dealing with people over the phone who were clueless or apologetic or both, wasting time that should've been spent enjoying a weekend getaway in Virginia rather than listening to broken promises.

If you're a business owner, avoid the temptation to come up with new and interesting ways to alienate your customers. This includes those vicious, pain-in-the-butt computerized voice response systems that take too long and do nothing but tick people off while you claim efficiency. It's not good business. It's contempt for the people who buy your products.
-- Christopher at 12:01 AM