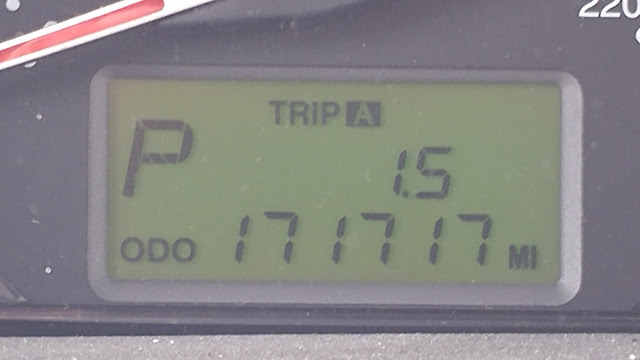 I snapped this picture when I looked down at the odometer on my 2009 Kia Spectra and noticed that unusual sequence of digits. Eventually, I want to get it up to 200,000 miles. A little beyond that won't hurt either.

I keep cars until the wheels come off. I kept an already-tattered 1987 Chevy Celebrity until the air conditioning failed and re-charging it would prove too costly and possibly illegal, given it used banned refrigerant. (Thank you, Al Gore.) My 2001 Kia Rio ran until the timing belt broke and it died on an I-10 off ramp, sputtering to a safe death at 170,000+ miles, likely nearly twice the anticipated lifespan. The Spectra had 44,000 miles on it when I bought it use. I intend to squeeze everything I can out of it.

Unlike the Rio, the Spectra is put together with quality, not frugality. It is not adorned with cheap, breakable plastic like the Rio, although some bits of trim have come off here and there. Desert sand has filed away the color from the top. One rear door won't open anymore because the lock is jammed. I don't use the rear doors very often for passengers, so I don't worry. Fixing it would likely cost some ghastly amount.

On the Rio, I had to have several belts replaced, along with a A/C compressor -- twice. It got new spark plugs. It got a few other odds and ends. On the Spectra, the only major repair I've done beyond normal preventive maintenance is the air conditioning. Even then, I went to a good mechanic who charged me half of what a chain in Tucson wanted.

Every month I can go without making a car payment is money I can put towards a new car. So your servant is content to let that odometer climb and climb to funkier numbers. When I'm ready to say goodbye to it, I've got something in the bank to work with. But not yet.
-- Christopher at 12:01 AM