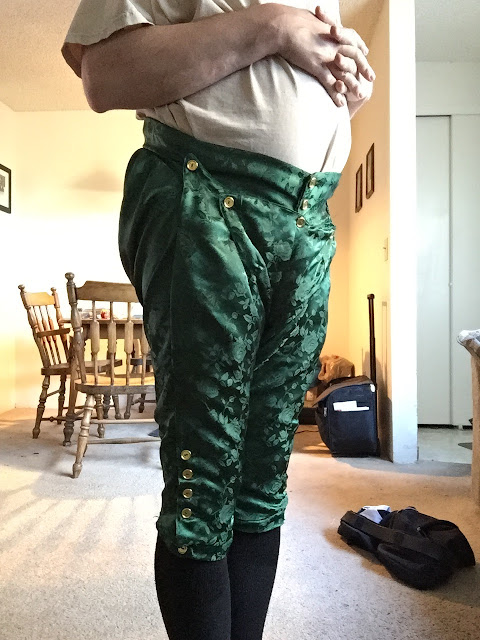 One of the most challenging projects in my sewing journey was putting together my first pair of highly-period-correct 18th Century knee breeches, ones that would be tighter in all the right places (around the lower thighs) and roomier in the right places (around the rear end). This pattern came with a warning: don't expect this to be a quick turn. Well, nothing ever is, the way I sew. It also says the process involves two parts: construction of individual pieces followed by assembly of said pieces.

Neither advisory stretched the truth. I spent a lot of hours just putting together parts that looked too small or too ragged or questionable of function. When it came time to put the pieces of this pants puzzle together, some of them looked like they were on backwards until other pieces came together or I turned things inside out. My faith in the instructions was sorely challenged at points. Most of this drudgery was due to these pants having pockets which I knew I would never use anyway because they were just too small. At most they might've held a watch. When I make pockets, I need them to hold a wallet, keys and a smartphone.

The instructions also said it was perfectly normal for this pair to slouch in front like you see, highlighting my expanding middle-age midsection. I didn't worry about that; a weskit would cover it. The bigger problem was the legs... or more specifically, leg room. I had followed the instructions to the letter and had the right size for my thighs, but when I first slipped them on, they were way too tight. I took the risky step of letting them down nearly to the edge of the seam allowance, using a zigzag stitch I hoped would provide more reinforcement. They have yet to be fully stress tested at a dance, but for now, they're holding up.

I posted this to a Facebook sewing group, and to my encouragement and relief, the response was nearly universally positive. A moderator who is akin to the Yoda of historic sewing said I was a brave soul for attempting this.

"Breeches are hard!" exclaimed another.

Since then I've found a simpler pattern, one that doesn't require so much assembly because it doesn't have pockets. I still have to take in the legs, because now they're too wide out of the box. But they don't look like a costume, they don't slouch at a peculiar angle, and they're tight enough without me having to worry about splitting them. I've been down that road before... 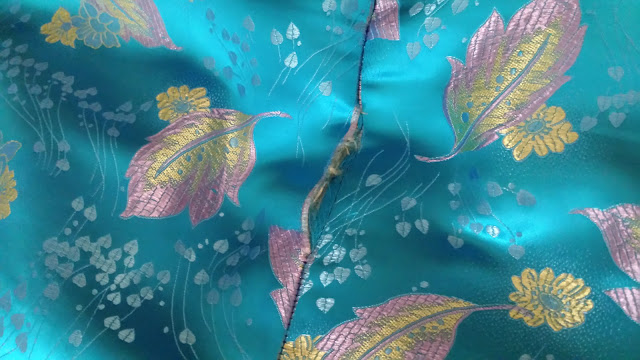