Picking Up A Placeholder 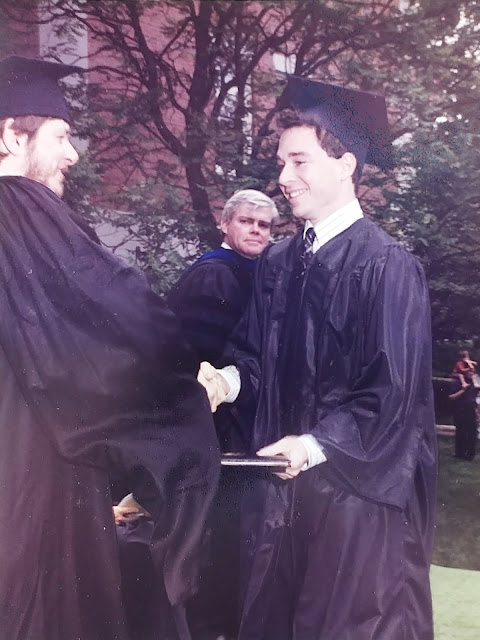 May 15, 1994: The day it all came to an end. That's your servant picking up a Bachelor's degree in Journalism from the University of Missouri. The person in the background who looks kinda-sorta like Newt Gingrich is Dean Mills, dean of the Journalism school. Yes, his first name was Dean. Nearly four years earlier, a psychology professor said to me and an auditorium full of freshmen, "You're going to be damn proud of that degree when they put it in your hand."

I was. Look at that smile on my face. That's relief. That's the convocation of four years of studying, sweating, searching, hustling, reporting, and learning more than a few lessons in and out of the classroom. Only when I lifted the cover of that black binder in my other hand, I had no fancy embossed certificate. I had a cute little letter congratulating me and telling me it would come in the mail -- later.

What they don't tell you, and what you find out later, is that the University does this to get what it needs from you. Often that can be parking ticket fines. You don't pay up, they don't send you the degree. I had a ticket I was disputing for "blocking traffic" in the parking lot of my dorm, which was MU cop shorthand for, "You didn't park your Chevy Celebrity in front of a concrete bar." When the parking lot has no yellow painted lines, and when you have a campus police department that will find new and creative ways to shake you down, much money will be expended. I contested the ticket and lost. I eventually just coughed up $50 and was done with it so that degree would arrive in the mail. 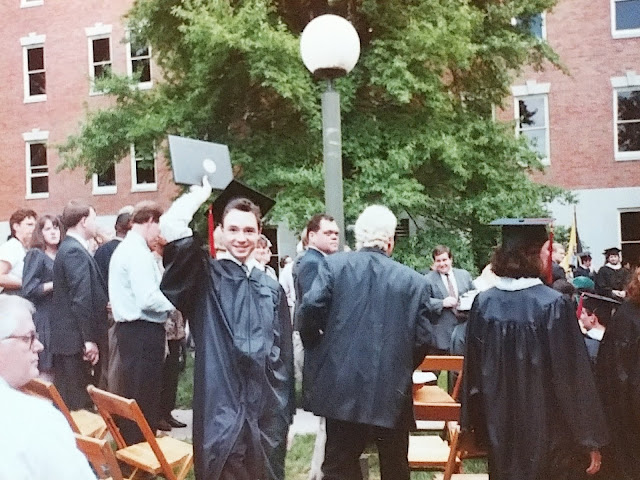 The ceremony took place in the shade and beauty of Peace Park, behind the journalism school. This was actually the second convocation of the day. In the morning, I had gone to the main one for the entire university, where Helen Thomas of UPI was the guest speaker. That one took place inside the cavernous Hearnes Center, home to Tiger Basketball and a concert stop by the Rolling Stones later in the year.

That gown I'm wearing looks good in the photos, but what you don't see is how thin and flimsy it is up close.  It felt like plastic mesh.  I gather that helped it breathe in the warmth of the late spring, but I wanted something a bit more regal and real after four years of sweating though studies, even if I had to sweat through graduation.  I would've liked to have had some chevrons on the arms, a yellow yoke around my neck, sleeves gathered at the arms, renaissance-style, and some actual velvet instead of the poly-whatever that went into this. 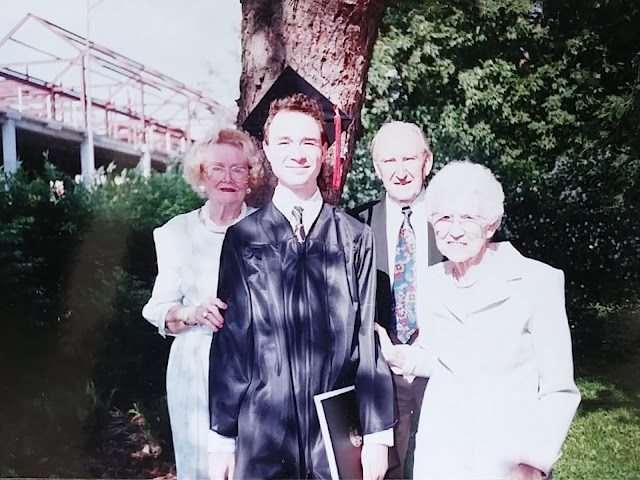 This brought together my parents and three surviving grandparents.  Standing from left to right behind me, they are Grandma Francis, Grandpa Francis, and Grandma Lawson.  Grandma Francis would leave this earth a few months later in August.  Grandpa Francis would follow in December 1999.  Grandma Lawson told me she loved me just a few days before she left in June of 2003.
-- Christopher at 12:01 AM