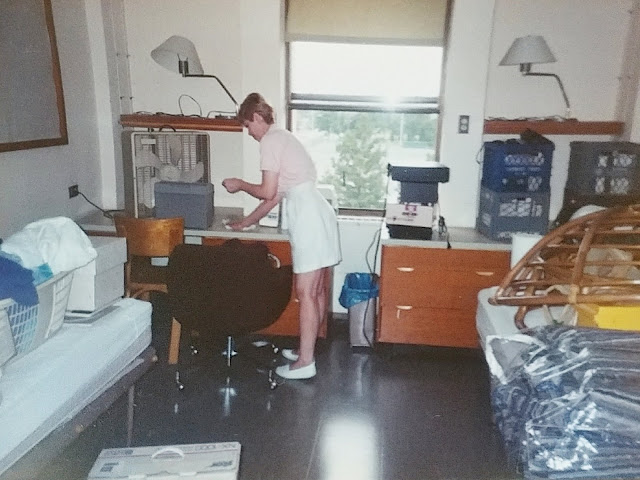 August 1992: My new dorm room at Hudson Hall on the University of Missouri campus. It's my Junior year, and for the first time, I have the entire room to myself. That's the Queen Mother meticulously wiping things down. She cannot stand even a little dust, and she wants to get it done before I start setting things up. A lot of those things, including books, are in those milk crates on the right. Those are actual milk crates, from actual dairies, not the imitation ones you see nowadays at container stores. On the bed to the right, you see the famous funky papasan chair, that comfy dome I still have today -- even though my parents wonder why.

The old reliable Epson Star NX-1000 printer is boxed up in the left hand corner. That printer churned out at least five term papers and more than a few stories for journalism classes. People were starting to move to ink jet and even laser printers at this time, but the Star never let me down. And it played nicely with the Commodore Amiga 3000 (not pictured).

After my parents said their goodbyes and good-lucks, I set about rearranging things. I shoved the two twin beds together along the right wall to create a Queen bed. The desk on the right came out and got shoved along the other wall to create a "stuff table," a place to drop backpacks, books, and other things I didn't want to put away at the moment. With the desk gone from the right, I created an alcove for the TV, stereo and funky chair with headphones. It felt so 70's in that corner, especially on that one Saturday night I was up late listening to the classic-hits radio station out of Jefferson City, and they started playing "TSOP" by MFSB, better known as the theme from Soul Train.