The Word Is MODESTY

Good gentlemen, what are you doing to yourselves? We hear this word a lot in the context of how ladies dress, but your servant wants to focus on the men -- because not a lot of people do. And frankly, I feel like men get a pass on this value when they should not.

When I worked at Six Flags Over Mid-America back in the 1990's, we had a rule for our male guests: no going topless. It didn't matter if you had the best beefcake and six-pack in the known world, you were not going to parade it around like you're on the beach. Put on a shirt. Still, guys would strut the hunk.

A skating rink in my hometown of Raytown had a similar rule: no tank tops. I gather this applied to Larry, a classmate who wore them year-round, even in the freezing Missouri winters. My working theory is he wanted the girls to see all his chest hair. He also had some beefcake. However, he never got into trouble at school for his fashion statement.

While Googling around on this topic, I was relieved to see I'm not the only person who's bothered by a double standard. Katelyn Beaty wrote in a Christianity Today article back in 2010:

While parents, youth pastors, and college staff spend much energy monitoring young women's clothing choices, young men are given few resources to think about how they present themselves, and how they might let a sister stumble. And I have yet to hear any Christian teaching on modesty as more than "covered up in all the right places." Before young women face undue pressure to monitor their male peers' sexual purity, Christian communities ought to provide a biblical context for why we pursue modesty in the first place—and make sure both men and women get the message.

Some years later, while navigating occasional attractions as a married woman (wedding rings don’t end that), I began wondering if modesty applies to men: Does a man’s shirt, or lack of, ever send wrong impressions? Does the fit of his jeans ever invite women to linger and (gasp) lust? Does immodest behavior, like flirting, ever harm his relationships? What does modesty require of a God-honoring man?

I think a lot of us don't teach young men about modesty because we think we don't have to. The Bible says a lot about how women dress, but little about the men. And we don't think a naked guy's chest is arousing -- especially if we're guys in the first place. Both authors point out the Bible's stand on this, but the short version is this: modesty shows respect to GOD.

This may sound silly to you, but I'll let it fly: I figure my love of historic clothing is partly rooted in my love of THE LORD. Revolutionary War uniforms are my favourite, because one can look like both soldier and gentleman, all the way down to the knee breeches. Truth be told, a gentleman's calves were quite attractive to 18th Century ladies. No wonder they wore stockings over their lower legs -- or even spatterdashes over the stockings. 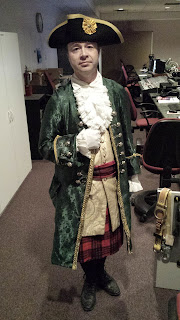 For my Scottish attire, I have always insisted my kilts fall below the knee. I hike up my stockings as far as I can get them so I will not reveal much skin, if any. Of course, that's impossible when I'm doing a festive twirl during a dance and the kilt lifts up. Before you ask the famous question, let me tell you I take proper defensive measures. When I told a fellow kilt-wearer that, he replied with this: "You know what that's called? Wearing a dress!"

In the 18th Century, people considered a gentleman half-naked if he wore anything less than less than three layers of clothing in public: shirt, weskit (vest), and coat -- in addition to the knee breeches, stockings, powdered wig and tricorn. This likely compelled a lot of sweat during those miserably hot colonial summers, but modesty was the rule, built upon the fashion sense of the time.

"I still wish men dressed like that," a lady friend once told me. The gentlemen would likely think otherwise. 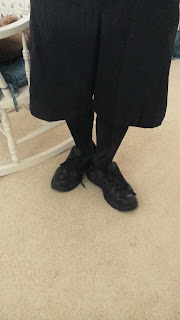 Even when I'm not dressing in period clothing, that fashion sense still worms its way into my thinking. I bought a pair of long shorts because they reminded me of 18th Century sailor slops. I paired them with matching black over-the-knee socks, and a retro-Colonial look was born. The Queen Mother still thinks they're hip-hop shorts, though.

Whatever you may call them, I can't see myself ever wearing ultra-short boxers, much less a thong bathing suit or tank tops. It's not me. It's not who I am, and I definitely wouldn't feel right. Other guys' attitudes will vary, so I can only speak for myself. And this tricorn-and-breeches wearing guy would rather be fully dressed in the presence of GOD and others.
-- Christopher at 12:01 AM