The Word Is ISOLATION

I never forget what it's like to be alone, not of your own choice, but abandoned by others. I felt it a lot as a bullied child. I felt it again after Election Day.

I saw people hurting. I saw people celebrating. And your servant was caught dead in the middle, just like that PoliticalCompass.net graph that measures where I am on the ideological scale. I never have considered myself liberal, conservative, authoritarian or libertarian. I don't fit neatly into any one political box, and the chart proved it. 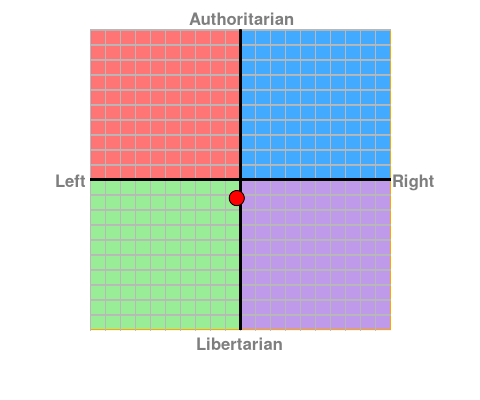 For many years, I have felt myself isolated from prominent politics, too complex to be summed up by a bumper sticker, a D or an R. I put on a tricorn hat and a Continental Army uniform and people will gather I'm conservative. Well, not all the time. I bend liberal on other issues. I will support unions while also supporting the right to work. I strongly support ladies on equal pay issues, just as I strongly support gun rights. But I also believe rights come with responsibilities. I partake of international folk dance and love to dress up as a Russian Cossack. I put a bumper sticker on my car last year saying, "Washington/Adams 2016." It's complicated.

"A lot of people feel the same way as you do," a friend tried to reassure me when I told him I felt abandoned by political movements.

Before and after the votes came in, I prayed a lot. When it was all over, I told people at my church while they praised GOD, they also needed to pray for those feeling scared or hopeless. Now was not the time for tap-dancing on graves. I even tried to share what I thought was a neutral, diplomatic and reverent stance on Facebook, something consistent with loving your enemies as well as your friends.

If I knew people were going to let loose on me, I would've kept my empathy to myself. Margaret Thatcher once said if you're in the middle of the road, you get run over. Various political factions hate moderates -- except when they're needed to win elections. Your servant was no different. People also accused me of not wanting to listen to other opinions...

"It is harmful to personal growth when you decide to shield yourself from opinions that are contrary to your own and thus keep your safe place safe. It seems that you just want to place controversial issues "out there" when you desire (your right), comment upon them (your right), but then exclude certain folks from hearing your voice in order to get the biggest positive bang of affirmation from your "selected" facebook friends. To be unwilling to hear differing opinions, retards intellectual growth."

I had to read the above from my own flesh and blood. On facebook. From a relative. In public. Like a two-year-old getting spanked at the supermarket.

Never mind that I listen to differing opinions all day in the newsroom or on Facebook as part of the business. It didn't matter. I offered a rose and felt it shoved down my throat.

When my friends don't act like my friends, it hurts. When they lecture me like a parent scolding a child, it hurts. When they say they don't want my prayers, it hurts -- even when I say, "Be Blessed" to them more times than I can count. On Facebook, nobody knows you're hurting unless you say so. They don't see me lying in bed at night, wondering what to say, what to do, or whether to do anything. They don't see anything I do to sympathize or empathize with others outside what I say publicly, or misinterpret silence for consent when it's just politely stepping away from the madding crowd under the if-you-can't-say-anything-nice principle. They don't see me sending birthday greetings and virtual courtly 18th Century bows every morning to people I have friended but barely know. On Facebook, I have an easier time living as that colonial nobleman who is more than just a profile picture. As a re-enactor talking to kids about their liberties or how to dance with regality and honour, it flows from me naturally as if your servant is countering the ugly in the world. And still, that ugliness bites my behind.

"If you take one thing away from here," I once said to a young lady in my persona as a soldier in George Washington's Army, "know that freedom doesn't come from governments -- it comes from GOD." That young lady happened to be a Muslim foreign exchange student who had been studying American history and found herself confused and bewildered about how a nation that fought for freedoms could soon find itself in the Civil War. Truth be told, I have problems understanding it myself at times.

Back in the day-to-day world, I sucked it up, buttercup, with my safety pins on the inside, holding the buttons on one of my Colonial coats. I had work to do, outfits to make and balls to look forward to rather than pity parties.

I told a friend I might have to step away from Facebook, something I chafed at doing. The social network is becoming the new e-mail, the indispensable part of digital life you can't opt out of because millions of people are on it. Even my workplace expects me to maintain a Facebook presence. But why allow myself to be bullied anymore? Taking gut punches is no way to live, but fortunately, that friend suggested a humane and diplomatic solution which didn't involve unfriending, blocking or deleting my account. I decided it was finally time to get up off the ground and stand up for my battered self by instituting a kind quarantine.

The response was immediate and overwhelming. People who never commented on anything I have written showed they had my back. And people I called friends proved they deserved that distinction. I thank GOD for all of them. Sometimes Facebook serves the common good after all.

Some of you reading this still feel isolated, and hopefully it's not because of so-called social networks that are increasingly anti-social. Or others chastise you because your beliefs don't neatly conform to either Holy Conservative Principles or Holy Liberal Principles. Remember this: you work for GOD. GOD will ultimately look upon your heart, not your Facebook friends (some in name only) or your real-life friends, or the political establishments trying to woo you.

When Phil Collins was going through one of his divorces, he wrote a song for Genesis called "Guide Vocal," on the Duke album. He summed up what I have often felt when isolated, but I didn't want to repeat out loud or on the screen in anger...

"I am the one who guided you this far,
All you know, and all you feel.
Nobody must know my name,
For nobody would understand, and you kill what you fear.
I call you now, for I must leave.
You're on your own, until the end.
There was a choice, but now it's gone.
I said you wouldn't understand.
Take what yours and be damned."

Don't be damned. Be Blessed. May GOD Bless You... even if you don't want to hear that from me.