Whatever Happened To Swap Meet Sid?

About 5 years ago, your servant did three commercials for the Tanque Verde Swap Meet here in Tucson. The basic premise was that I was some nerdy swap meet fanboy who enjoyed buying and selling. I did it to help out some old friends from Channel 13 who are now thriving in their own production company, Epic Productions. I had to get clearance from my bosses at work and waive any financial interests. Essentially, they got my services for free.

So why do it, then, besides good friendship? To put a stake in the ground for something that could lead to bigger and better things later on.

Bigger certainly came quickly, in the form of billboards all over Tucson. 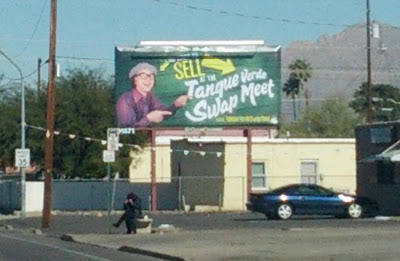 I even popped up on the radio, to my surprise. I suddenly heard my own voice coming over the speakers, and I realized my TV spots had been re-edited for radio.

Alex, one of my producers, envisioned the campaign as a starting point for a model that could be used with other flea markets in other states. Under his idea, I could be pitching for swap shops in Missouri or New York or Indiana. We would just have to tweak some things here and there.

I had bigger pipe dreams. I could be the new Flo from Progressive and make mad money.

That would've worked, if the Swap Meet had been interested in continuing the campaign. But they weren't. Six months on the air and they let it run its course, reverting back to some of the south-side vibe ads they'd done before. But they kept the new logo we made for them. I can't point a finger because I'm not privy to all the specifics, but I wish we would've gotten at least a year out of it. At least with newscasts, that's about the time you need to really see if major changes in direction have taken hold.

So I haven't been able to quit my day job. And my face isn't on any billboard anymore.

But I did become kinda-sorta famous. The morning show folks on Mix-FM here in Tucson openly chatted and speculated about who I was. And I got a shout-out at church when I walked in before service during band rehearsal.