What Is The Worst Gift Anyone Ever Gave You?

I know we're well beyond Christmas, but I gather some people out there are still wondering what they're going to do with certain white elephants they got under the tree. Only one dud gift stands out in my mind -- a certain white and blue sweater jacket that came from one set of grandparents, who got it from Norway.

I don't have a picture of the actual item, but it looked something like this. It would have been a sure-fire winner in some ugly-sweater contest. My grandparents innocently bought it for me when I was 10 years old (or younger), having seen all the children in Norway wearing them. I politely accepted it and thanked them, but I never wore it. Neither did my brother Michael, who got one in a red-and-black version. I knew the realities of bullying should I put it on and put a target on my back.

I don't know what happened to that jacket. Maybe the moths ate it. Maybe we sold it at a garage sale. Maybe somebody bought it and burned it. Who knows? Granted, it's not on the level of Ralphie's bunny suit. Michael's coat found a new home on a willing participant. 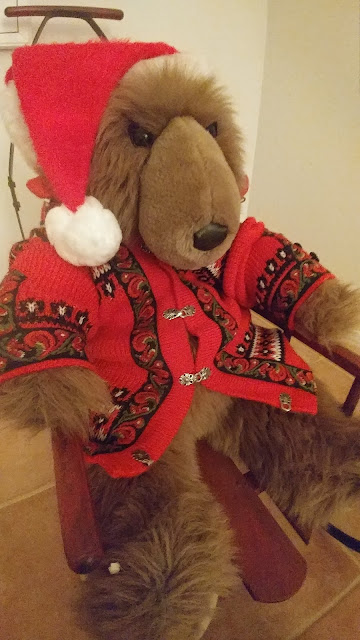 I give my relatives major props for steering clear of obvious tackiness. Still, sometimes, a miss is a miss.
-- Christopher at 12:01 AM