Have You Ever Considered Forming Your Own Historic Dance Troupe?

It sounds fun at first glance. You might think getting to be a colonial dancing master in present day would fulfill one of my fantasies. To tell you the truth, it's not something I'm interested in. 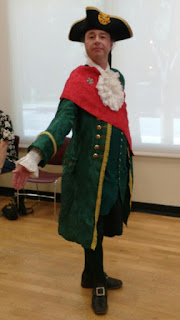 I have a day job, one that consumes most of my day, leaving me little slack to deal with other things. When I get home from work, the last thing I want to do most nights is work some more. Running an organization is work, especially if you decided to run it yourself.

A historic dance troupe -- at least my idea of one -- involves performances and balls and educational functions. It involves planning and practicing and procuring time and space. It involves money for rentals and insurance and travel and music. It's not something I would like to handle by myself.

"Then delegate! Get a board of directors!"

Easier said than done. Finding people who can share your vision and bring new ideas that fit with it can be a demanding task. Again, it goes back to time -- not just my time putting everybody together, but everybody else's time as well. Sometimes groups evolve organically, just from being together so much they decide to get more organized and raise the bar. That's the way I would like it to work. I know I'm asking a lot.

I would rather focus on the one part I think I do well: instructing and demonstrating the actual dances rather than planning the event containing them. I have found it more enjoyable to team up with homeschooling groups, educational organizations and other folks who have wanted to put on a ball. I don't consider myself very skilled at promotion or managing ticket sales.

I have told people that their dreams and their abilities have to meet up in the middle. I'm following that guideline out of necessity and reality.