Does It Ever Bother You When Somebody Calls One Of Your Historic Outfits A "Costume?"

This is an interesting question because it can reflect the attitude of the person answering the question. I know some historic re-enactors who will ruffle their jabots and tricorn feathers even more if you call it a "costume." It's "period attire" or "historic clothing" or "kit." "Costume" is reserved for the theatre, and it usually involves a zipper.

I read one person describe it this way: "Costume" is what you want to be. "Uniform" is what you are. But under those definitions, I shouldn't be wearing a Revolutionary War uniform. I know I'm not a Colonial soldier. But I am trying to convey the life of a Colonial soldier to young people in my historic interpretations -- even if I don't act as if I'm living in the 18th Century. 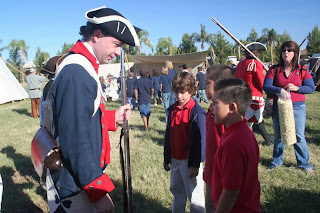 The leader of our group gave us some advice on how we could approach interpretation. We could choose either first-person -- where you live as a person in the past, using only the words and descriptions and knowledge base they would have used -- or third-person, where you act more like a docent, somebody who just happens to be wearing the garb of the past but knows the present and can connect the two. I tend to enjoy third-person a lot more having done both. It allows me to get through to people, here and now, and make them care about their history. I couldn't really do that when I was acting as someone still living in 1776. I have heard about one living-history museum that believes in "still-living history," where their historic characters live as they have been around for 200-some years and know all about what happened after them, yet they're still living in the past. It's an intriguing method of having it both ways, but I haven't really tried it.

I don't get upset if somebody calls it a "costume." That's a word people use, and for me, chafing at that term is kind of like insisting somebody say "graphic novel" instead of "comic book." Just don't call my 18th-century persona an "act." I've danced at too many beautiful balls to allow that description.
-- Christopher at 12:01 AM