The Tricorn Vs. Antifreeze

I bought my first real tricorn hat in 2003, after feeling it was time to move up from that cheap costume-store version. That may have worked for the patriot outfit I wore back in 2001, but it just didn't make it anymore. I didn't know yet that I was drifting into the world of re-enacting. 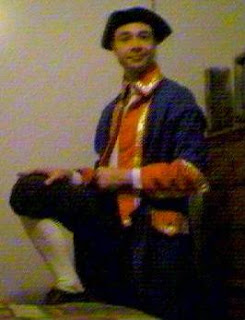 I did know this: a version from Jas. Townsend And Son was the right hat at the right price.

The hat and a better outfit made for a better experience.

Then came the time I put it in the back of my car near a half-full container of Peak antifreeze -- a leaky one. The conniving chemicals conspired to wash the blackness of the felt into the whiteness of the tricorn's trim, leaving an unremovable splotchy stain.

The Queen Mother told me not to despair. "You know, I bet that's just bias tape," she said. "We can get some at Walmart."

Ripping out that hand-sewn trim nearly broke my heart. But if silver thread and golden needles wouldn't mend it, perhaps the clean white bias tape around the edges could mend it a bit. The Queen Mum and your servant worked together to iron it on. I also decided to equilateralize the sides for a more triangular shape. The job didn't go perfectly, but the end product looked decent. 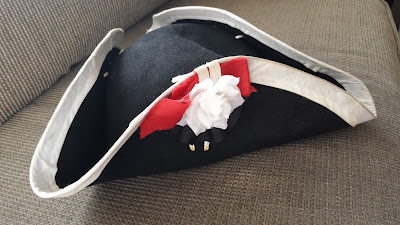 "You can always get another hat."

True, but I held on to this one. It has become my casual tricorn, and I have dressed it up a little more. I have worn it to sports bars as an inside joke for work parties, and interesting things always happen. Ladies will come up and want to touch it. People will offer me drinks because of it (soda, because I'm off alcohol), and then there was that one redhead who came out of nowhere and hugged me.

"I gotta get me one of those," I heard a co-worker say.

Now, if we can only get people to stop automatically calling it a pirate hat...
-- Christopher at 12:01 AM