THE IDEA: I like my Jacobite shirt I wear with my Scottish attire because it has puffy sleeves. But I felt I could make something even puffier. I also wanted a longer shirt, more like a tunic, perhaps something befitting of an Eastern European peasant.

THE CHALLENGES: I acquired the pattern (Butterick B4486) for less than a dollar at Savers. I acquired the fabric from Hancock for about $15, picking Kona cotton. I could've gone with muslin, but what I saw on the bolts didn't look good enough, and some of the fabric that did was a little too sheen. This is a historic shirt, not a wet t-shirt contest. I went with the Kona because of its stark white look and sturdiness.

Immediately I ran into challenges. That pattern I bought from the thrift store lacked a couple of pieces: the sleeves. I purchased another at Hancock for a ridiculously cheap price. Then I got home to find those missing pieces from the discount-store pattern had actually fallen on the floor undetected while I was unpacking it.

I also goofed on how much fabric I needed, and I ended up buying half a yard too little. But I was determined to make it work with what I had. So what if the sleeves were just a little bit shorter? Maybe they wouldn't have as much puff, but I could compensate in other ways.

Once I had the parts cut out, I tried to follow the instructions to the letter. Tried. I have no problem with sewing together big pieces. It's the tiny bands and hems and holes that turn my efforts into amateur night. I got the collar on with minimal muss and fuss. Those front neck bands refused to be rational. I won't talk about the bottom of the neck opening.

I still had to deal with the sleeves. I've basted and gathered before, and I figured it wouldn't be much of a chore after my experience on the puffy pants. Wrong again. Those puffy cranky sleeve ends refused to gather into a rational layout. Then I had to figure out a way to get them into the cuff and finish off the sleeve.

This is where your humble servant will admit he skipped steps he didn't understand, couldn't execute, or thought he could simplify. The result on the outside doesn't look bad. The inside view will have you experienced tailors demanding I turn in my needle. Somehow, I made this process look halfway neat.

Many of you will say the seam ripper has become either your best friend or your most demanding mistress. I turned to it several times over the course of this project: first, to give me some more room to account for my fattening stomach; second, to give more puff to my sleeves; and third, to begin undoing the mess created by making two left sleeves.

When I got my bearings straight and everything sewn together and hemmed up around the loose edges, I still had to make buttonholes. Somebody forgot to tell me the machine won't do it well when you have a pile of sloppy fabric above the feed dogs. Improvisation, frustration, and Fray-Check followed. 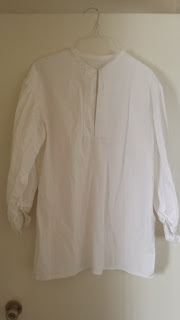 THE RESULT: In this quick-turn project, done on a whim while I was home with family, I ended up with a peasant shirt that draped nicely down my thighs but caught on my right shoulder. I couldn't figure out why. The other shoulder felt fine. I tested it out at a historic dance with my puffy breeches, a woolen belt and a faux-fur hat: instant Cossack.

I later discovered my sleeves were still too short, after comparing them to another shirt. And after one washing... well, that was the step I should've done first and avoided the cursed shrinkage.

The shirt now sits in my wardrobe in a state of limbo. I don't know if I will ever be able to wear it again unless somebody can tell me a way to unshrink it. I suspect it will go to an aspiring merry peasant someday.

As for your humble servant, I can always make another shirt.... something in blue, perhaps?