THE IDEA: After seeing the interpreters at Jamestowne Settlement wear these puffy pants, I wanted a pair. They looked outrageously comfortable. And they also might double for Cossack pants, fitting my "one item, multiple uses" goal.

THE CHALLENGES: I downloaded a pattern from Reconstructing History. Just piecing the pattern together was a major accomplishment, as I will discuss later in this series.

My fabric came from SAS. I chose lightweight maroon muslin with muslin backing at a total cost of less than $20. I kept the budget low; this was the first project I was attempting to start and finish with little outside coaching or supervision, and if I messed it up, I didn't want to be out a fortune.

Cutting the pattern proved challenging. The pieces filled my kitchen table and then some. I had to keep setting and resetting my cutting mat.

I didn't know how to gather from a basting stitch before taking these pants on. That's where I got more coaching from my sewing mentor, who showed me how to pull in the fabric without breaking the basting thread. Dozens upon dozens of crinkles later, I had my gathers ready to sew down -- after I made another waistband to replace the one I sewed incorrectly and made too small. I had to do the same for the lining and then join the two.

The instructions called for a hand whip-stitch to help secure the waistband to the top of the pants legs. I put that in, painstakingly. But when it came to attaching the bottom cuffs of the pant legs, I discovered a way to cheat using a machine stitch. I made several passes over those legs to secure them, knowing those legs would get a vigorous workout from dancing. Along the way, I had to tack in tiny gathers that weren't sewn down.

With that, I made the buttonholes, attached the fly and then the fabric-covered buttons, which I easily made from a kit I got at Hancock. I also needed to adjust the button on the waistband for my deceptive middle. 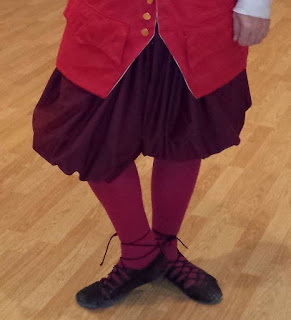 THE RESULT: Indeed these breeches are the most comfortable I've ever worn. Because the lining is smaller than the outer fabric, the puff holds up very well and doesn't flatten out. People marvel at how full they look. They don't feel heavy at all. And they work beautifully with my Puritan tunic -- I found that out at Thanksgiving. They also look great with a puffy peasant shirt, which I will discuss later.
-- Christopher at 12:01 AM