Lady Darley At School With Friends

Several weeks after my first letter to Lady Darley in winter 1989, she sent her first response shortly after the Ides of March, along with a picture: 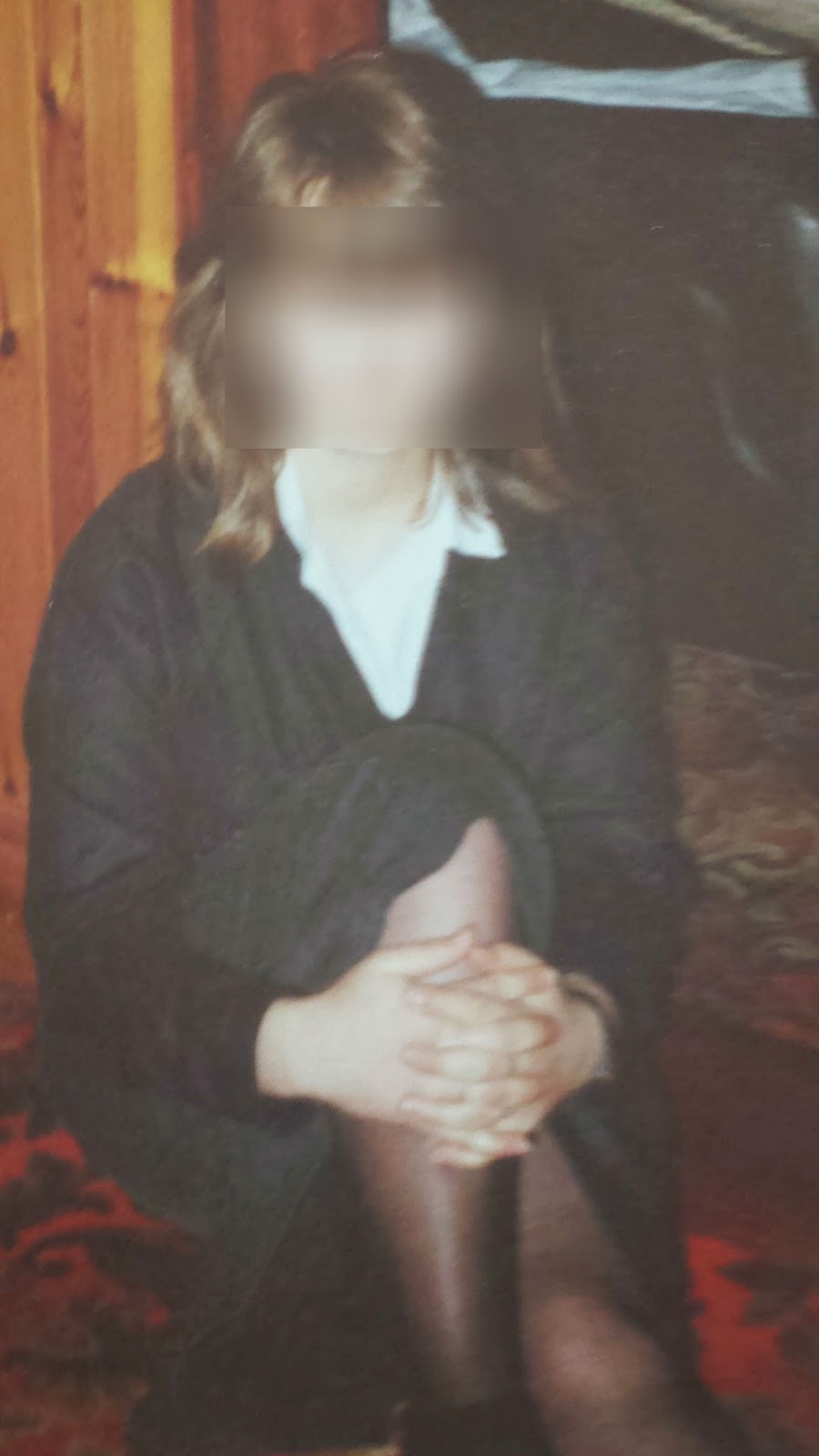 Well, this is almost her picture. I've blurred her face out of privacy, as I mentioned before. I've also changed a few names in her letter below:


As you can see by my photograph, I'm not exactly pretty or I'm not even thin. It's not just self modesty, it's honesty. Thanks for your photograph. Was it old because you don't really look it? Many people told me that I look older than my age.

I can't remember what photo I sent her. But in her second letter, she dives deeper into her life as a 15-year-old girl with her assorted friends, and she responds to whatever I told her about my lack of a dating life.


It really isn't the end of the world not going on a date. I don't know whether I told you of the the two boys I've been out with. Well they are really nothing to shout about because I don't speak to them anymore. The first guy I really liked and I thought he liked me, just not as much. But I went to a party with him one night when I was really in love with him I suppose. But [Arthur] asked me to do something I wasn't prepared to do.

She doesn't elaborate. But all of you can probably guess what it was, and Lady Darley is a woman of character.


He got really man and shouted rude remarks at me, making me look so stupid. I overreacted and said something like if he wasn't prepared to act normally towards me because I wouldn't do what he wanted, then there was no point in our relationship going on. So we split for awhile and we had lots of arguments and we never really make it match. Our arguments have rolled into one big vendetta against each other and we have never been good friends since

The other guy I've been out with is called [Garry]. There wasn't really much in our relationship and I'm actually quite surprised it lasted 5 months. But this was basically during exams and we didn't see each other much. But don't worry about not having your first date yet. You are better off without girls.

I didn't exactly think that way, as you will see later on.


Do you think when I passed my GCSE exams, the American government may like me or let me do college in U.S.A.? I don't know why I want to do this, but I'd just like to go to school in America. Did [your friend] tell you that I want to come and visit her next year in June for about 3 weeks? Maybe, if you haven't met then or moved we can meet if I visit her. I hope I will manage to save up the money for it. But I also hope she will have me?

Lady Darley had a lot of curiosities. She was young. She wanted to see the world. But she had her doubts and insecurities, worried she wouldn't cut it as a friend.

Here's where Lady Darley appears to have taken a break from writing the letter, letting slip that she's jotting it down while in school. When she picks up, she breaks out of contemplation and dives into girl talk.


Well my so-called friend [Julie] has just read this letter and laughed. I don't know why, there's nothing funny, is there? Well she has had her hair cut at last! It used to be at least 3 inches longer than my hair but now it's about 4 inches shorter. Actually it's similar to what mine used to be like.

Now we get to the point where she responds to a major disclosure. The same girl who introduced me to Lady Darley seemingly had a crush on me. I thought she did because she would approach me with a soft, dreamy, "Hi Chris." And I was perfectly willing to be her guy.


So how much will you give me not to tell [your friend] you want to be her boyfriend? Or does she already know? By what you have told me about her I get the impression she's very popular. But when she writes to me she doesn't really say much about herself. So maybe you could tell me about her, as are obviously interested?

Well in about half an hour I should be having a test. In what? Well, all about the treaty of Versaille, Trionon [?], St. Germain, Lousanne, Nevilly [?] and possibly a lot more I don't know about. But really, what good will it do me knowing about those things? Well something is quite odd. [Laurie] is a away. Yes you've guessed it. She has the test too! I suppose another good reason is she's about one month behind everyone else in notes and I think Mr. Amy was going to keep her behind. But well I better go for a while because the bell's about to go. So wish me luck for the test! But I will of had it by the time you get this anyway.

Well I'm in History now and I've had my test. As usual, I've looked in my book and I've got most of them wrong. What a stupid thing to ask about Marshall Foch. Well I didn't learn it, but not to worry, it's over now. Oh, [Laurie] has just walked in. I better keep quiet. I suppose you would say, "Better late than never." Oh whoops, she's crying! What for, now? Oh dear, her grandad's ill. Oh dear, [Danny] no. He's just hit her on the back because she's stood on his bag. Well, you did ask for it, [Dan]! She slapped him! Even though [he] is lovely, she did give him what he deserved. Sorry, back on to you!

I hope you will have lots of luck if you do move to St. Louis. Won't you miss your school friends [and they] miss you if you move? What about your schooling, do you do A-levels, if so what?

At the time, I knew I would miss my debate friends, but I was intrigued at starting over, starting fresher, and leaving some of my nerd baggage behind. All that mattered was that my high GPA would go with me, but nobody had to know about that unless I wanted them to.


I agree with you, I would love to be a writer, but I've never quite got around to it!

Could you tell me please what the speech and debate team is because we don't have it in England? Do you go to the same place that [your friend] goes to. She told me about that. It sounds alot of fun and you and enjoy it.

Lady Darley then returns to some drama.


Well I'm having some trouble at school at the moment. Basically with two friends. [Laurie] thinks that I can't be friends with her as well as [Julie], who I'm good friends with also. But I've tried to explain to her that I want both of them as good friends but she doesn't really see it. [Julie] agrees with me about it, but we can't convince [Laurie]. Well actually I'm running out of things to say to you. It's really hard because I don't know you well enough to know what you are interested in.

A reminder -- I don't have copies of the letters I sent to her. But I gather I hadn't shared enough yet.


Did you have work experience in your school at my age? Well we have and today I got my form for mine. I had three options of where to go and I've chosen to do junior school and nursing. I'm not exactly sure what I want to do, but teaching really is a good start or reference to any career I may want to pursue later.

Have you seen the film Cocktail with Tom Cruise? I haven't yet but I plan to go and see it on Friday night.

Well today, or should I say last Friday, was Comic Relief day in England? It was a day when charity events go on all over the country. At my school, Highfields, we did a human centipede. 462 of our students tied our ankles together. We had to walk 30 metres and we broke the Guinness book of Records. We also raised 252 pounds for Comic Relief.

Maybe we could return or sent each other tapes or send each other local or gossip magazines. I do have Mizz, but you may not like it because it's a girl magazine.

Well, I can leave school next year, or could, it just depends on my exam results. I'm really dreading them. But there's no point in worrying now. I'll make my life a misery. I hope I haven't bored you. Write back soon.

Looking back at this letter more than two decades later, I never remembered the "Lots of Love" and those X-kisses at the end. I don't really understand how I earned that sentiment, seeing as we both barely knew each other, so far away...
-- Christopher at 12:01 AM

Dearest Jo,
I know she is still living in England, and she is not on Facebook. I have not tried to re-connect with her as of this writing, and I may not ever be able to. The reason: I would eventually have to disclose that I published her letters online, even with the names changed. It's not something conducive to re-starting a relationship!