Anticipation, Frustration, And The Manners Of A Refined Young English Lady With A Crush

Lady Darley's next letter, dated the 1st of March in 1990, was intended to arrive unexpectedly. Then again, a lot of her letters arrived unexpectedly, so it wasn't anything surprising. Also unsurprising: her expectations and complications for her anticipated trip to America are building.

Hi, how are you? I hope this letter greets you well. I can imagine that you are probably wondering why on earth I am writing to you. But hopefully you are pleasantly surprised and pleased about my letter arriving on your doorstep. I hope that's true, isn't it?

I was looking at your last letter only about two, no maybe five minutes ago. Do you live near the coast now or was it just the way you were drawing it?

I gather I included a crude drawing of St. Louis and its location nestled among the Missouri and Mississippi rivers, and how it probably looked like oceanfront property.


I'd love to live near the sea with a beach to go and be on your own. I think you are really very lucky if that is how you are. But then again this may sound like a load of old codswallop. (English expression) Well anyway, I'm trying.

Have you had lots of snow where you live? We haven't really. Last night it snowed about three inches, but that isn't much really is it?

Three inches of snow is nothing. Six inches of snow is respectable. Eight inches of the white stuff and you're out of school for at least a day in St. Louis. My brother had a friend who was in cahoots with one of the people in our school district who made the call on snow days, so we knew the night before and didn't have to listen to the radio the next morning on whether we were in school the next day. The advance notice was helpful for knowing whether we had some extra time to get homework done.


Have I ever sent you a picture of Darley Dale, where I live? Well when I find a little show that have them, I'll buy one and post it to you. It will probably take quite a long time to get there through because they seem to be at the bottom of the pile in the priority scale.

As you can probably imagine, I never seem to go a whole letter to you without mentioning [your friend in Raytown.] I apologise. It must get really boring for you. But if it does you should just tell me, o.k.? Well you obviously know that I want to come to U.S.A. to visit both of you. She has told me in several letters that this is fine. But when my parents wanted some kind of notification from her mother she hasn't written back. As you can imagine, I'm beginning to gain the impression that she doesn't want me to go and was only being nice. Now she's giving me the cold shoulder. My mum thinks it would be better for me to wait till I'm at college and come to U.S.A. via Camp America. Have you heard of them? But I really would like to come and visit the two of you.

I can't read minds, but I gather the friend who introduced me to Lady Darley does not want the parents involved, if she can help it. Or it's getting too complicated. Or she doesn't know what to do, or how to handle a pen-pal who's going to be staying several weeks with her.


Can you answer me a couple of questions? You know me quite well. Do you think if I came to the good old U.S.A. that I would fit in with [your friend's] friends? What kind of friends has she got? How far away from Houston is Kansas City? If I came it would be a lot cheaper to fly there. But it depends how much it would cost for me to catch a Greyhound bus. But my total cost for my holiday would be approximately 800 pounds. Quite a lot of money, don't you think? I need a sugar daddy to give me about 300. Do you know anyone?

I can only answer those questions as I think I might have answered them in 1990, at the age of 18. I think Lady Darley would fit in with my friend's friends. Houston is farther away from Kansas City than a comfortable bus commute. And yes, 800 pounds is quite the price tag. But no, Lady Darley, you don't want a sugar daddy. Not even in jest. Just no.


I know if [your friend] doesn't write or ring soon with a letter from her mum then, I'm sorry, but I won't be coming. Then I'll be visiting Berlin to the wall. That's before it comes down anyway. Do you, or is there a way you can telephone her and let her know how I feel? You must be able to find her number somehow. Thank you!

Can I tell you something about my life at school? I've probably told you about me liking a guy called [Morgan]. Well, I don't know him. My friend, probably my best friend [Laurie], he knows her and they talk. But I don't think he likes me. We had Valentine's Day on the 14th of February and I forgot my card for him. So unknown to me [Laurie] sent him a homemade one. You being a member of the opposite sex, a male species, would it be a bad gesture, or would it be a little bit of an offputter, would you think I was a cheapskate or just imaginative?

Again, I don't remember how I answered this at 18. But all these years later, I might say Lady Darley is better off querying Emily Post. Wait, I know: I'll answer as Laird Christopher, Colonial dancing master and working expert on protocol. "My Lady, as a gentleman, I would be most appreciative of your intentions, even if the expression of them came through a third party. I would not question if your friend was trying to save face for your oversight, if indeed I gathered the token of affection had not come from Your Ladyship, or if she was merely acting on your behalf to craft a better sentiment than you could have delivered on your own."


Well before I tell you about this, promise you won't laugh, as to some it may seem really silly. [Laurie] talks with [Morgan] and his friends when I'm there, but she can't understand why I get embarrassed. I try to study all the surrounding walls, doors and people. She hasn't introduced us because she would introduce me as [L.D.], as that's what she wanted or did write on her Valentine's card she made. What is also very embarrassing is that all his mates know about me liking him. One of them I know quite well, he is always talking to me and dropping hints about who sent the Valentine's card. O.k. this was the background information. What would you think if this was happening to one of your friends. He knows who I am but hasn't told [Laurie] whether he likes or dislikes me. But o.k. that is a point against me. But another one is that he tells people that he doesn't know who the girl is who sent him the card. Also when people ask him who I am, he's saying that he know my name but can't put a name to the face. Do you think by this he likes me or he doesn't or that he is still umming and ahing (another English expression). What should I do, do you think?

I read through all this now, and I'm thankful I never walked through the minefield of some teenage relationships. What I can see are two shy people who aren't sure how to approach each other although everybody else seems to be pushing them together. They know they would rather meet on their own terms instead of everybody else's, but the mechanics are fuzzy. Maybe there's some British teenage cultural norm I'm missing here. Part of me wants to reach back through time -- in many ways -- and tell Lady Darley, "Your Ladyship, if only I could do you the honour of being your emissary, approaching this gentlemen to say, 'Lady Darley requests your company at the time of your leisure.'" Okay, that's a bit much. But it just seems so, well, English.


Do you like these records? I think these are absolutely brilliant:

At this time, I was digging The Beastie Boys' first album, License To Ill, but that was about it on the rap sheet. Dance wasn't moving me a lot, except for maybe Technotronic and Madonna were putting out.

What do you think about the designs [Laurie] did on my letter? I like them anyway. 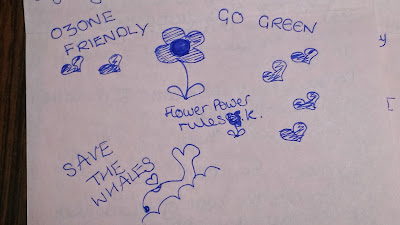