Watch Out For Those Puffy Pants!

Back in 2016, when I first started dipping my toes into international folk dancing, I was still trying to perfect the idea pair of puffy Cossack-inspired pants. In this mixer dance, you can see that I overdid it.

They had what I wanted -- that swish, just like the kilt. But they also had these annoying loops of fabric in front that somehow hadn't gotten tucked in or tacked down correctly, so they just flew around. My long tunic shirt and the belt helped hide it, but they couldn't eliminate it. I made another pair, and this time the fabric was too heavy and too droopy. Finding the right bedsheet to experiment on proved elusive until I finally nailed the formula: a king size sheet, preferably of lightweight cotton, and so many inches from waist to knees. (No, I won't give you the amount here. It's my personal version of the Colonel's secret recipe.)

I figure I have made at least half a dozen pairs of puffy pants, with varying degrees of success. You can't have too many colors, either. 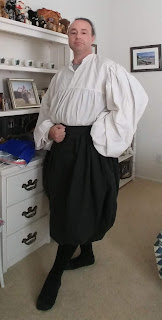