They All Wear Kilts!

Scots and Greeks share a common heritage point: the kilts! Granted, Greek soldiers are the ones who mainly wear them, and they call them fustanellas, but I've made my point. I have wondered whether any Scottish and Greek dance groups got together. Turns out, they have. The above video shows it, although you only see the Scottish kilts in this mash-up.

Last year, your servant decided to make his own fustanella from scratch. I was surprised to find no open-source instructions or patterns anywhere on the internet. So I had to reverse-engineer my design from looking at pictures and videos -- mainly of dance groups. The proliferation of Hellenic dance troupes has actually made it easier to find the garb for sale. But I wasn't about to pay $700 or so when I could make the outfit myself.

I took a king-sized sheet and split it into four long strips, which I pleated and wrapped around until it looked full enough. I also needed it to fall below my knees -- modesty, always. I have seen some half-fustanellas and they would make your servant feel like he's wearing a miniskirt.

The open-wide-sleeved shirt came together easily. I found a vest at Savers -- another terrific score from a terrific store. Add in two pairs of tights -- two pairs because the first one I ordered claimed it was "opaque," when it clearly wasn't. I ordered a Greek cap from eBay. All told, the project cost about $50. 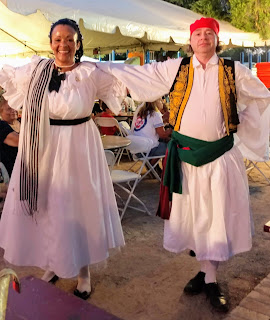 The next step: wearing it to the local Greek Fest here in Tucson. Because doing something like this can get you mixed up with the event participants, it pays to ask the organizers. I sent a picture of me wearing the attire over Facebook. Their reply: "Get down here! We love your spirit!" Not surprisingly, your servant (along with Pricess Sherri, who joined me) got to pose for more than a few selfies and pictures. And we danced. A lot. One gentleman in particular who could've just stepped out of Zorba The Greek gave me a big hug. Opa!

Despite the many compliments, I wasn't completely satisfied with the way the project came together. The fustanella didn't look pleated enough. A couple of weeks later, I figured out why. I actually needed to baste the heck out of the strips of fabric, not pleat them. I made a second Greek kilt, and that will now go over the first one to give it a fuller look and more support. And yes, we'll be back at Greek Fest next year.
-- Christopher at 12:01 AM