Nice Outfit, But What's With That Big Phone? 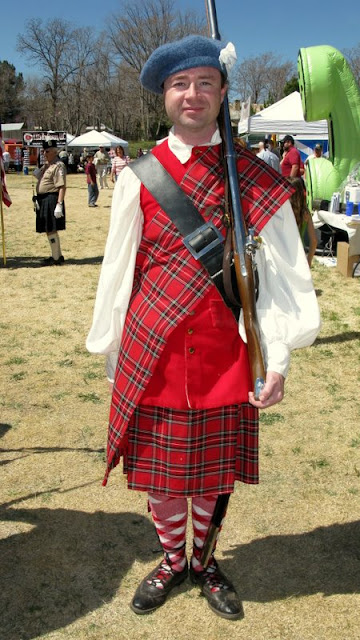 March 2009: A visitor shared this picture of your servant, dressed in Scottish Jacobite attire, ready to march into battle. Look carefully, and you'll see my bayonet holder hanging down towards my feet. This image comes from the Verde Valley Highland Games, the smallest Scottish festival I know of in Arizona. I later enlarged this and hung it on my wall. I sort of look like a toy soldier in this, and perhaps that's why I like this picture.

Other people have zoomed in on that big green phone in the back.

"What's a phone doing at a Scottish festival?"

That is actually part of an advertisement for a wireless provider -- I'll let you guess which one -- that showed up to the games. The commercial booths help pay the freight, and I can live with that.

I miss the Verde Valley games, even though they weren't that big of a deal. It was another chance to see another part of Arizona I don't usually get to -- and wear a kilt.
-- Christopher at 12:01 AM