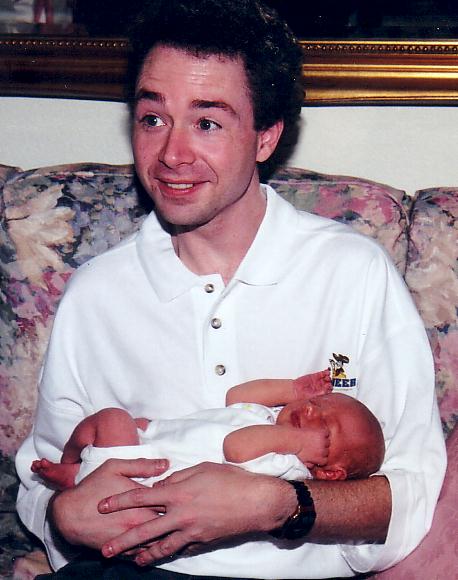 July 2003: I'm holding wee Campbell in my arms for the first time. She's so tiny and pretty. Her uncle is looking so frazzled and spent. That's what happens after a week of wildfire coverage.

"There you are Christopher," my brother said. "Your new niece!"

The Queen Mother is not shy about making comparisons.

"I had to do this with you," she says when it's her turn to hold the new bunchkin. "Because you would not stay quiet."

Campbell spends most of the day snoozing. But when she wants milk, she'll do her best to get it -- even by trying to nurse off my mother's arm.

"Oh it's so frustrating," Mother says sweetly. "There's no milk in there!" My sister-in-law, however, makes sure she's getting her fill.

In the coming months, Campbell amazes all of us with her ability to be cool, even in the noise of The Field, an Irish pub in San Diego's Gaslamp district. She sleeps right through the bustle, and even when she does wake up, a pacifier in her mouth mellows her right out.

My Queen Mother wishes she had it so easy with her first-born, who could have been dubbed the Prince of Wails.
-- Christopher at 12:01 AM