My sewing journey begins some 30 years ago, in a middle-school Home Economics class, on a well-worn Bernina. The class spends half the semester in the kitchen and the other half in the sewing room. That's where I learn how to thread a bobbin, work a hand wheel, spot a selvage, cut a pattern, and use a seam ripper. We practice our stitching on paper before putting a needle on fabric, mastering the art of controlling the pedal and the presser foot.

The guy in front of me enjoys messing with my machine. I break at least one needle. I could've broken a whole lot more if those Berninas hadn't been built to withstand reckless youth.

We make aprons out of denim, although I don't think I ever wear mine more than a few times -- that strap was flimsy.  We make simple pairs of sweat pants; I forget what happened to my pair.  Perhaps it wasn't big enough in the end. I do find use for the super-sized pillow I create, which props your humble kid servant up in bed for reading or the TV.

Aside from a repair job on my Royal Father's driving gloves, I never had the need to sit down in front of the needle. Thus, what I learned in front of the middle-school sewing machine evaporated over the decades.

When I started wearing historical clothing, I found willing seamstresses and tailors. I paid them, and they made what I needed to my specifications. But part of me still wanted to do it myself, not wanting to have to occupy friends who had other projects to indulge my creature comforts. I wanted the freedom to see something and then make it.

For the young people reading this: it's not out of character for men to sew. Men are tailors after all, as a good friend reminded me. So when one of my historical friends offered a sewing day for the ladies, I took the leap of wanting to get in.

"One [outfit] I would like to make is a mid-1700's green frock coat -- with large sleeves," I wrote in an email, explaining the method to my madness. "I would like to try my hand for starters at a mid-1700's linen weskit (the longer, mid-thigh variety) in a red colour -- something to go with one of my kilts or other colonial outfits."

So on a Saturday last June, in front of my teacher and mentor's Brother machine, I started pulling threads from the fabric of my memories as I re-learned the craft with some coaching. 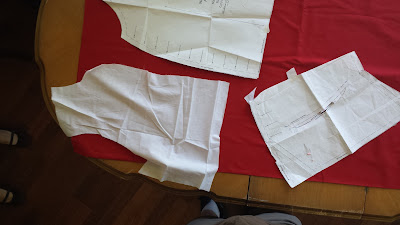 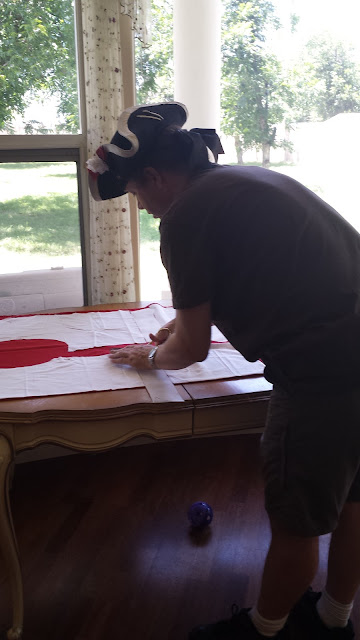 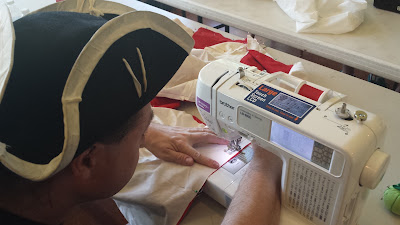 In a great miracle, that knowledge returned with minimal mistakes. My coach helped refresh my memory, but she didn't have to prompt or prod too much. A simple reminder here and there sufficed, leaving her to attend to other sewing projects with other sewers while I plugged away. Slow and steady stitching won the race. What problems I encountered were not beyond repair. I chose the weskit because it wasn't too easy and wasn't too hard. Win or lose, I would wear the fruits of my labour. After a few sessions on that borrowed machine, I had my weskit. After another long afternoon with a needle and thread, I had the buttons attached. And mostly, I had pride.

The weskit I fashioned in the top half of the photo would encourage your humble servant to take on the puffy pants in the bottom half.
-- Christopher at 12:01 AM