COMPLETED: About a week later between work and life in November 2015

THE IDEA: I wanted to get closer to the original vision I had for the first puffy shirt. I also wanted to cut out a lot of the frustrations I had, keeping things simple and neat. I also wanted puffier sleeves and something in blue.

THE CHALLENGES: Once again, I used the Butterick B4486 pattern, but I acquired the dark blue muslin fabric from SAS for about $10.

This time I cut out a lot of the frustrations. Instead of going for a separate collar piece, I just made a narrow hem. Ditto for the neck.

Puffier sleeves come with new gathering issues on both ends. The chief problem is keeping things neat on the wrist end, and my basting thread wants to break. I get through it, but I wish I would figure out a better way to hide the gathered ends. I think it should be tucked up into the cuff, but the cuff doesn't want to play. Pins don't want to hold. This end looks uneven. That end looks messy. Nitpick, tuck, adjust, fume, do it again.

Up at the shoulder end, the job is moderately easier, but again, that basting thread wants to break on me. At least this time, I've figured out how to avoid making two left sleeves. But I have go back and smooth out gathers that are gathered in the wrong place -- on the front of the shirt instead of the sleeve.

Now, the buttonholes. I'm doubting this machine's buttonholing capabilities as I try to put in a small hole. The feed dogs can't get a grip on the fabric, even if I smooth it out. I re-do the buttonholes multiple times on each cuff until I get something that looks decent and stable. It's not beautiful, but it's going to have to do. Only a stitch fascist would care.

A narrow hem around the long edges, one more button and buttonhole in the neck, and at last we're done. 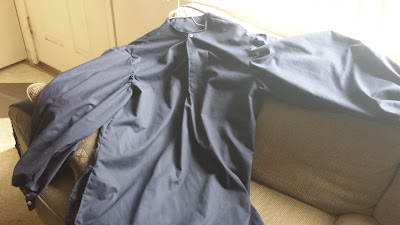 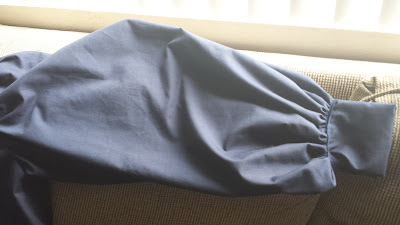 THE RESULT: It's puffy, it's festive, it's blue, and the sleeves are long enough. And it looks much better when I'm wearing it. It works with either my blue kilt ensemble or the puffy breeches to make an instant peasant. I broke a lot of rules and skipped a lot of pattern steps, but in the end, I did it my way.
-- Christopher at 12:01 AM