THE IDEA: For my return to sewing, I wanted a practical project. No more pillows. No more aprons. This weskit -- what we now call a vest -- would replace one I bought on eBay several years ago when I had a smaller stomach. I wanted red to go with my Royal Stewart kilt. But the item could easily go with white breeches, stockings and a coat for a civilian 18th Century outfit. "One item, multiple uses," has become a key component of the historic clothing I acquire. I don't want something that will only work with one look. It has to have adaptability. 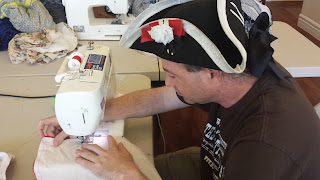 THE PROCESS: Acquiring the material proved more challenging than I expected. I wanted to go with pure linen, but after scouring every Jo-Ann in Tucson along with Hancock Fabrics, I couldn't find pure linen in either the color or quantity I desired. I could have cheated and gone with a linen blend, but I wanted to start off right. I ended up picking red cotton with white muslin backing.

My sewing friend and mentor had the pattern, which we modified so that the weskit hung halfway down my thighs, as weskits in the 1740's and before often did. As the 1700's progressed, the weskits shrunk, so by the turn of the century, they more closely resembled our modern-day vest.

I spent at least half an hour cutting the pieces carefully with scissors. That convinced me to add the first thing to my sewing-room wish list: a rolling cutter.

Assembly came over the course of three sessions with my friend's machine. As each step came together, and I saw the project taking shape, quitting for the day proved tough. I could've sewed all night. My teacher-mentor noted I had drive.

If only I had my own machine... which I was working on acquiring.

THE CHALLENGES: Beginner's anxiety is compounded by not having a spare empty bobbin. We wound my red thread onto another threaded bobbin which had some room to spare. That trick worked until the time came to sew buttonholes. The red thread ran out and the orange thread wound beneath it caught on. Suddenly I had a buttonhole with a hybrid red-orange lining.

My teacher sighed and reached for the seam ripper.

Indeed, she did. I carefully dotted the orange threads into the shade of red we needed.

"That's the guy's way of fixing it," I remarked, envisioning Tim "The Tool Man" Taylor recovering from a sewing disaster.

We didn't have to use the seam ripper very much. Prudent stitching and experienced coaching made the difference.

THE RESULT: Adding brass buttons from Benno's completed the look and added a burst of elegance. Working sizable pockets mean I have a place to stash a non-period wallet and smartphone. It doesn't press on me like a girdle or drape all over like it's two sizes too big.

Mission accomplished.
-- Christopher at 12:01 AM