Last week, I was with a few members of the 1st Virginia and 1st Minnesota as we had fun with some families. We lined up a few dozen young children and taught them to march. But the real fun came when we formed up to fire. They didn't have stick guns, but they did have stick swords, water pistols, and plastic ray guns. They fired several volleys at their parents and charged them -- three times.

After the kids calmed down from multiple assaults on their betters, we gathered everyone around for some hymn singing and testimony time. Our colonel recognized many of those kids had never seen a hymnal. But we sang several selections from the books passed around, including “Amazing Grace.”

We heard from a few children who told us what they thanked GOD for. One remembered a time he prayed, when he immediately felt a rush of wind.

Another disclosed a hardship: “I am thankful because we didn't have a home, and now we have a home.”

Then a child named Will (which has been changed to protect his identity) spoke up and told us he had lost his grandmother about a year ago. He didn't think GOD was answering his prayers.

Listening to him broke my heart. When our afternoon of fun ended, I walked over to Will's parents and told them I would be praying for them.

“He and his grandmother had a special bond,” his mother told us. “It's a day to day thing.”

Will was bouncing around and hugging his folks like nothing was wrong. You would never know the hurt by looking at him. But his mother confirmed it was there, and she was thankful for my prayers.

As I thought about Will and offered what ministrations I could, my eyes watered. When the family left, and I returned to my comrades in arms, a fellow private could see I was shaken. I could barely talk to him without crying, recounting what I had learned and how it kicked up a memory.

“All my grandparents are gone,” I recalled. But I still couldn't believe I was crying for a child I didn't even know.

My fellow soldier suggested I wept because I deeply wanted GOD to use me to help this family. I thought about it. Could it be a cry for help on somebody else's behalf?

A similar thing happened four years ago, when I volunteered to interview a mother who had just lost her daughter in a car wreck. A bombardment of memories and a house full of mourning relatives brought the water to my eyes. That was when GOD was starting to soften and rebuild my heart, although I didn't know it at the time. 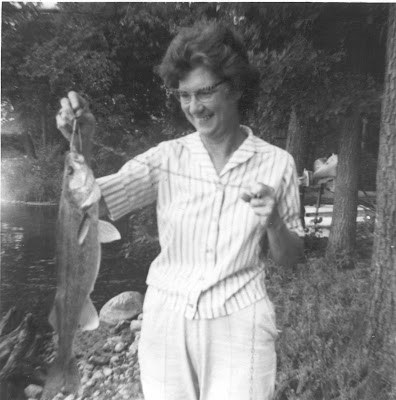 When I lost my Grandma Lawson in 2002 (pictured at left in my favorite photo of her from the 1960's), I recall weeping for only about 10 minutes on the plane back to Kansas City for the funeral. But I'd been expecting it -- I'd last seen her one year earlier and realized that I might not get to see her again.

A few days before her last breaths, I called her hospital room. A nurse answered the phone and told me Grandma was too weak to speak.

“Tell her I love her,” I instructed.

She did. Then I heard a labored whisper in the background.

Those were her last words to me. To this day, after losing three other grandparents suddenly, I am still thankful I could see my beloved Grandma Lawson ride off into the sunset and be there to wave goodbye.

People will mourn death in a thousand different ways. They may wash the pain out of their system like a good shower. Or the shock takes over, and a weird empty feeling stands in for any grief. Some grieve for awhile and move on, but then they tow the loss behind them like luggage. However they do it, you can't always tell.

Thousands of people can't get rid of the baggage, but they don't think they need counseling, or they don't want to be seen as mentally ill if they get help. It's especially hard for men because of the boys-don't-cry mentality parents drill into their heads. This ignores the fact GOD gave both genders emotions and not so we could repress them.

Valentine's Day is a horrible time for those like Will who have lost their most cherished loves. While everybody else is taking part in the flowers and chocolate and diamond jubilee, they are left out of the party. But we'll never see it.

This year, this mostly media-hyped holiday falls on a Sunday, and I hope it will give you pause. In your Sabbath prayers, please remember those who are still grieving, silently or otherwise, for those who have lost their Valentines. They need GOD's love. They could use your love, too, measurable beyond the red hearts and doilies and sugar-coated confections.
-- Christopher at 7:29 PM