The Original Field Of Dreams 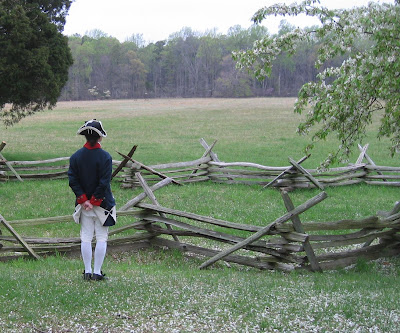 Looking over the surrender field at Yorktown, I can see the climatic scene play out once again: the British commanders half-heartedly ordering their troops to ground their arms and the long lines of redcoats tossing their muskets aside. A few spit and several weep. They shoot eyes of disgust to the assembled Continentals and militia. The losers walk away humiliated to the fifers' tune of "The World Turned Upside Down" and "Yankee Doodle Dandy."

Surprising as it may sound, I can picture the humiliation the redcoats felt. The British had things they believed in, too. As much as we believed in our liberty, they believed in the sovereignty of the Crown. They were following orders. However, that humiliation in 1781 seems noble compared to what has happened to others who have fought wars and lost.

A few tears fall from my eyes.

A new nation is born on this field, a great experiment in government... which you can argue is still in the experimental phase.

Our leader observed today that the 13 colonies had a population of less than 3 million people at the time of the Revolutionary War. That's less than today's population of Maricopa County (Phoenix-area), Arizona, and yet from that population came an all-star list of patriots: George Washington, Thomas Jefferson, Ben Franklin, John Adams, Patrick Henry, Thomas Paine, and many many more.

So how is it today, he asked, with a U.S. population of 300 million, we don't have a list of charismatic, patriotic, principled, honorable leaders 100 times as long? Why?

Here's my theory: those best of the best aren't running for office. They have seen what politics has devolved into. We know its persistent undercurrent of unseemliness and legalized hustling. It's not about serving people or providing principled leadership -- and yes I know about Ron Paul and Barack Obama. It's about raising money, running campaigns, getting elected, working through the minefield of lobbyists and getting bills passed. You give soundbites while making speeches most of your constituents never hear. It means developing a thick hide when the talk radio sharks come biting because you dared, dared put your knowledge of the issues to work and vote against some train-wreck bill on immigration, flag burning, same-sex unions, Iraq, tax cuts, guns or some other issue that gets people worked up into a lather. You don't even read the bills you sponsor; that's what a staff is for. And in as little as two years, guess what -- it's re-election time, and unless you're Ted Kennedy, you hope like heck you can raise the money you need to help you keep your job.

Notice I never mentioned the word "honor" in any of that. It should be an honor to serve. Your elected officials will tell you they're honored to do it. But scandal and partisan baloney have stained it all. Great minds don't choose political careers. They're too good for that. To be sure, we have quiet, respectable lawmakers, but they don't make headlines. It's all about perception and star power, as Arnold Schwarzenegger, Jesse Ventura and the late Sonny Bono can attest to.

As for the current occupants, we all put them there. Maybe we wanted more goodies instead of tough love. Maybe we just can't handle the truth. It has been said you get the leaders you deserve. Don't blame the media for underinforming you -- do some homework for cryin' out loud. This is a nation irrigated with patriots' blood, and we owe it to them to vote for something better. Then maybe we'll finally end that experimental phase, once and for all.
-- Christopher at 10:02 PM