Even In The Darkest Hours...

It is 1862.
Union forces are on the Peninsula.
Yankees advance towards Richmond.
Yet Virginia’s finest ladies and gentlemen find reason to celebrate and hope for the future in a glorious ball presented by the 1st Virginia Volunteer Infantry and We Make History.

“Be ready to gallop. Be ready to reel,” Captain Scott advises the gathering before him -- soldiers and commanders of the 1st Virginia and the awaiting Virginia Belles.

Color pours from the ladies’ gowns, hooped and ruffled, fitted to perfection, evidence Union blockades are failing spectacularly in any attempt to efface the beautiful dressing of the fairer ones. The recruits stand proud in their powder-gray wool uniforms, buttoned in gold, decorated with lace cravats, kepis removed as social graces dictate. 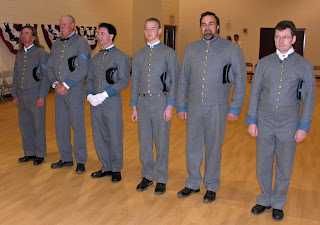 Flags and tri-color bunting enliven the spacious ballroom, outfitted with a new wooden dance floor just in time for the festivities. The guests arrive from all over the country, southerners and northerners filing through the doors. A few Federals join in, setting present hostilities aside. An Austrian ally arrives to a warm welcome. A soldier from the modern world finds a room full of Americans grateful for his service. He leads the gathering in the Pledge of Allegiance and the National Anthem.

“Three cheers for the United States of America! Hip Hip…”

The nation may be divided, but on this night, it is unified. 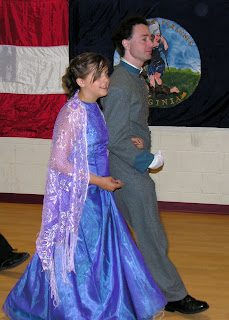 A contemplative Virginia recruit from Tucson stands among the crowds as they pair off for the grand promenade about the hall. Rested and renewed from skirmishes out West, he turns his attention to finding a partner. He does not have to look far. A young lady standing not three feet away graciously accepts his invitation -- a gracious bow - - as the couples line up.

All about, couples are greeting and exchanging names as their anticipation builds. The recruit smiles at his companion, but utters not a word. They both feel a little shy in this moment, preferring to enjoy the music of the Privytippers -- bass, guitar, and banjo.

The parade flows into the customary mixer, where couples meet and share a swing and a smile before changing partners as they circle around one another, stepping in and out to the side, simple steps intimidating no one.

Set dances might intimidate even the most stalwart Virginian, but not on this occasion, and especially not through the skillful direction of caller Miss Becky.

“They seem to build on each other,” one dancer notes.

He is right, for the first set dance incorporates familiar patterns from the mixer, and the second one incorporates moves from the first. Change up the chasses, stir up the swings, add a new move, and a new dance is born. The newcomers grasp it with ease. The more experienced and lively Virginians look forward to each new set with the anticipation of showing off their polish and poise. 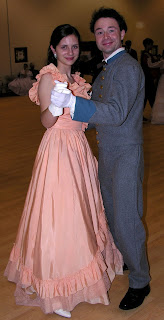 “Do you have a dancing companion?” the recruit asks, quick to catch a lady alone on the floor, eyes searching.

“May I be yours?” he offers with a cavalier bow, one foot out front, perhaps dating him back one-hundred years to his time as a Continental soldier, or perhaps a nobleman. He cannot help it -- not that the ladies mind.

They are with the finest of gentlemen tonight, and a generous number share a special honor as Virginia Belles, that title bestowed on young women of paragon character who represent the best of society to come, each representing a county of Virginia in what will hopefully in a fully liberated Confederate States of America. A gallant member of the 1st Virginia escorts each one. With so many counties and so many ladies, the odds are quite in the gentlemen’s favor, necessitating more than one escort per soldier! 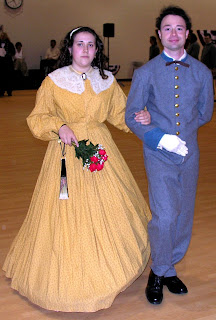 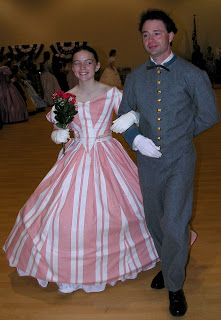 “Find your partner for the Virginia Reel!”

Start the pocketwatches… but not so fast. The Captain informs his guests this is merely an appetizer for the feast yet to come -- a marathon reel. Stonewall Jackson, he notes, was known to lead his men in short marches before the longer ones. Surely the same logic shall suffice on the dance floor.

Somewhere in this progression, the Tucson recruit’s set disjoins from the call. The couples fall behind. But disaster does not even wink at them. In a ballroom miracle, they continue on without missing a step, leading themselves, dropping hints for each other at the next steps, proceeding without trepidation and making nary an error. They are true Virginians, dancers for all their lives, unfazed at a few new steps or a few old familiar ones.

The recruit stands bedazzled at the set after the final notes fade.

“That was a fine job,” he compliments in breathless admiration. “That could have been a disaster! Everybody did wonderfully!”

Captain Scott relays a dispatch from the battlefield. The Army of Northern Virginia is pushing those Yankees back. Richmond is spared. It is not something the two Federals in the ballroom desire to hear, but encouraging developments nonetheless. Victories end wars. Stalemates lengthen them.

A rousing anthem from the 1st Virginia fills the hall. 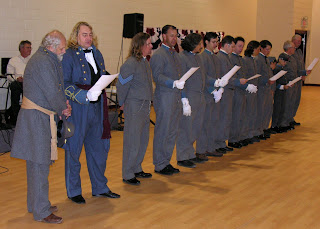 With such a rousing battle cry, how can any man resist the urge to enlist? But suppose an irresistible bonus was offered for those stragglers and doubters. Suppose a dance with a fine Virginia lady? All it takes is one of their shoes.

The new recruits line up behind the battle-hardened soldiers. 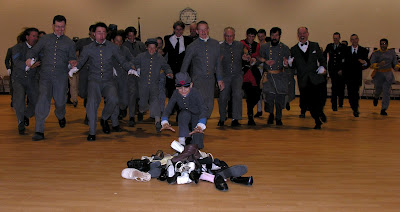 In a matter of seconds, the 1st Virginians storm the floor, grabbing their prize as if it were running away from them. Hands clasping shoes rise in triumph, the victors clutching their spoils as they seek the ladies who fit the footwear. As fate would have it, the Tucson recruit finds himself rejoined with the young lady he escorted in the promenade. She radiates spirit and thoroughly enjoys the next set with him.

Dancing produces many animated companions and a few unexpected ones. One mixer involving three-person sets starts out promising: a gentleman flanked by two ladies, with the gentleman passing on to other sets. Mathematics knows no ballroom decorum, however, and the mixer often produces sets of three gentlemen. The Tucson recruit sees it happen to himself three times in a row, most dramatically in a troika which finds him dancing with his Captain and Sergeant.

“You are quite lively!” the most superior officer observes.

“Is it possible for me to be any less?” the recruit responds, relishing the awkwardness like the next battle.

More amusing combinations emerge in the cookie dance, that highly anticipated, highly entertaining, simple to learn, impossible to forget mixer variation where ladies and gentlemen line up before three chairs. One in the middle holds a tin of cookies. Two others fill in the outside seats. The person in the middle then hands the cookies to one person flanking him before chasseing off with the other, preferably of the opposite gender. Then again, probability and ratios lack the proper respect.

The Tucson recruit ends up surrounded by the modern-day soldier and another gentleman, but the solution is not difficult.

They roar their battle charge, plunging down the center of the lines, a cry guaranteed to drive even the bravest Yankee clear to Maine.

Energy and joy consume the crowds. They clap as much they can, the thunder of hands reverberating and piercing the air, leaving no bystander unimpressed. Even the bunting on the walls longs to join the assembly as it peels away from its stiff upright stance.

For the Tucson recruit, it is more than a test of stamina. It is a chance for redemption. The last time he preformed this dance, he erred greatly on a crucial step in front of his commanders. Standing in the set with them again, he would show them he could dance it like a true Virginia gentleman and earn the respect of the lady who approached him as a partner.

Chasse back and forth… and now let’s reel!

With the lady leading him just a little, he reels along the line with no mistakes, no offside moments, no red-faced embarrassment. Relief flows through him as he chasses back to the head of the set and leads the lines into the arch of hands, his task accomplished.

Minutes tick by and the dance intensifies with the heat of revelry. Exhaustion taunts. Yet the dancers pounce and stomp with escalating vigor in each repetition, shouting and clapping. They unleash myriad rebel yells and bellows of encouragement.

“Long live Virginia!” the recruit shouts with half his wind as he reels through the line of ladies once again, buffeted by the fierce fire of clapping and stomping about.

Winded, another recruit yanks off his jacket, tossing it aside for the saving embrace of fresh air. It defies ballroom convention, but it keeps him in the dance.

When the last note of the Privytippers sounds, 27 minutes have expired. The point is proven, and the crowds have yet to see a ballroom full of Yankees top that.

The intensity of the reel dissolves into the grace of a waltz. The Tucson recruit chooses a partner who shows him how to twirl a lady, for which he is grateful.

“I would rather dance a thousand waltzes than anything on a modern dance floor,” he confides to her, even though he admits only a basic waltzing ability.

The Captain draws the evening to a close with words of thanks and an observation on how the arts have the overlooked ability to inspire us.

“Who here has been inspired?”

A confident cheer rises from the crowd.

Many continue the celebration with a hearty meal at a nearby establishment of modern-day treats. Good food meets good company, and the clash of centuries does not go unobserved by the establishment’s modern-day patrons who smile in amusement. Even in the darkest hours of war, joy prevails, follows us, and dwells within us back to where we came.