The Lightning Round:
You're Going Down

Coming off the high of the Highland Weekend, reality of the low-lifes out there hits pretty hard. And this week, the cops bagged a biggie.

GOTCHA, WARREN. After more than a year on the run, the law finally caught up with Warren Jeffs, self-proclaimed prophet of the Fundamentalist Church of Jesus Christ of Latter Day Saints (FLDS). Jeffs has some 10,000 followers, many of them concentrated in the neighboring remote cities of Colorado City, Arizona and Hildale, Utah. He also has a large rap sheet, accused of arranging underage polygamous marriages to older men. The Utah charges include two counts of rape as an accomplice.

When Jeffs appeared in court Thursday, his laconically lanky self seemed hardly the tyrannical clergyman ex-FLDS members have described. KOLD News 13's Randy Garsee has travelled to Colorado City and Eldorado, Texas, where the FLDS has enclaves and documented a shadowy culture of multiple wifes and unflinching, mob-like loyalty to Jeffs. Even before he went on the lam, the prophet led a secretive existance worthy of a mafia Don.

"I'm hoping it won't make a martyr of him. I think he's a sick man. The religion has overcome his mind. He's not God, although by the way he acts and what he's done to people, he's almost there," he said.

We vividly recall this exchange from 2004, when Randy tried to arrange an interview with Jeffs from a pay phone in Colorado City:

RANDY: "Hi there, Brother Issac, I was wondering if I could talk to the Prophet today."

RANDY: "My name is Randy Garsee. I'm with KOLD-TV in Tucson. Would he be available for an interview today?"

ISAAC: "Negative, he would not."

RANDY: "Does he ever talk to the media?"

That's as close as we got to Warren, considerably closer than the law got for more than a year. We used to joke about who the law would find first: Jeffs or Osama Bin Laden. Now that somebody has told him he isn't God, what life really remains in him?

From The Salt Lake Tribune:

[Movave County, Arizona investigator Gary] Engels said he asked how Jeffs was doing and whether he was "OK," adding, "He said yes, and that he's 'at peace' with things." After small talk, Engels began to try to question Jeffs. But Jeffs then invoked his Miranda right to remain silent.

Employees at the Fort Worth headquarters got messages Tuesday morning saying: "The work force reduction notification is currently in progress. Unfortunately, your position is one that has been eliminated."

Company officials had told employees in a series of meetings that layoff notices would be delivered electronically, spokeswoman Kay Jackson said. She said employees were invited to ask questions before Tuesday's notification on a company intranet site.

So the company line is, "you were warned." I guess it beats the death-ritual summons to an executive office for a lecture on tough times couched in boilerplate appreciation for services rendered -- which they can't remember anyway. Radio Shack decided a quick shot behind the ear was better than hanging. But woe to those who turned on their computers and bought the bullet. At least have the courtesy to say, "Dear John... "

WE'RE CUTTING YOU OFF. Starbucks offered free iced coffee to employees and friends through an e-mail -- until the offer got out of control.

Asked whether Starbucks will give this type of offer another shot, [Starbucks spokeswoman Valerie] O'Neil said only, "We're always looking at different ways we can share our products."

With Starbucks dotting the country like a rash, we got beyond "sharing" long ago.

SCHOOL DAZE. I think it's called "letting the animals run the zoo." Students at a Lorain, Ohio high school had more control on the first day of classes than the teachers -- who were striking anyway.

From The Morning Journal of Lorain:

Teachers voted for no confidence in the administration, four students climbed out of high school windows and eight security guards were fired for failing background checks.
...
The scene inside the high school was ''crazy,'' as ''chaos'' reigned while students watched television, talked on cellular telephones and played the card game Uno, according to several students.

LET'S PLAY WITH ELECTRICITY! Here's something the students could've done in lieu of science class: turn a pickle into a lightbulb -- a very smoky, stinky, lightbulb.

Oh, what fun we could've had with this story if Kris Pickel was still with us in Tucson. 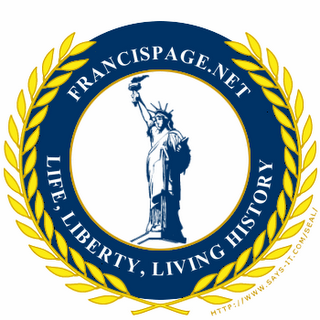 SEAL THE DEAL. Ever wanted your own fancy-schmancy official seal? The web comes to the rescue with the Official Seal Generator. Pick your inscription, some stock art, a border, and you're good to go. At the left, my unofficial attempt. We'll dress it up sometime in the future.