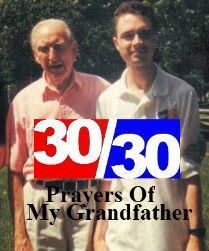 On the back of a scrap of a memo from the University of Kansas, Grandfather Francis gives us a history lesson:

In ancient times, all rich men had stewards. They had to be trustworthy, yet have the ability of business managers, because they had full charge of their master's possessions. The Earth is owned by THE LORD. HE gave man the use of it and all living things.

So man is a steward of the LORD'S possessions, all of his to use and trade upon. But of the increase, THE LORD said, a part of that is MINE. So as good Christians, we should return that part to further GOD'S work.

But how much is "a part?" A lot of people how much they should give. JESUS taught us it's not about how much we give, but what percentage, as HE taught in the parable of the widow and the giving box (Mark 12:21-44):

JESUS sat down opposite the place where the offerings were put and watched the crowd putting their money into the temple treasury. Many rich people threw in large amounts. But a poor widow came and put in two very small copper coins, worth only a few cents.

Calling HIS disciples to him, JESUS said, 'Truly I tell you, this poor widow has put more into the treasury than all the others. They all gave out of their wealth; but she, out of her poverty, put in everything—all she had to live on.'"

At the same time, GOD makes it clear in Deuteronomy 8:18 he wants us to have stuff -- provided we don't let stuff get in the way of our relationship with HIM.

Jeremiah 29:11: "'For I know the plans I have for you,' declares THE LORD, 'plans to prosper you and not to harm you, plans to give you hope and a future."

Proverbs 28:25: "The greedy stir up conflict, but those who trust in the LORD will prosper."

And In Matthew 6:33 (NIV) JESUS says not to worry about our day-to-day needs: "But seek first HIS kingdom and HIS righteousness, and all these things will be given to you as well."

The Bible doesn't mention a specific percentage, but many people use the percentage of 10 percent, calling it a "tithe." Actually, a tithe in the ancient nation of Israel was a tax of 23 percent, of which 10 percent went to the church -- and that was giving under compulsion, which the Bible warns us not to do in 2 Cor. 9:7. We advise people at TCC to aim for 10 percent, because our research has found people who do so are more likely to meet GOD's expectations of consistent and sacrificial giving.

When leading newly baptized people through the ropes of being highly effective Christians, my church compares Christians to bankers -- GOD'S money is on deposit with us, and HE wants to make a withdrawal, we should comply as good bankers. As I have said before in this "30/30" series, Grandpa took stewardship very seriously. My Dearest Aunt Susan found a booklet on stewardship along with the various prayers you've been reading this month.

And here are some other verses on the subject, but be advised, they're not in context, so you will want to read verses around them to get the full meaning.
-- Christopher at 12:01 AM