Where Are The Young Princes?

Try this experiment: go to Google and type in "girls who want to be princesses." Wait, I'll do it for you. Notice the plethora of links devoted to princess culture among the young ladies.

Now, try this search: "boys who want to be princes."

I'll pause while you either lament the dearth of relevant links or pick your jaw up off the floor. Near the top of the search results is a site called "My Princess Boy," run by a Seattle family whose 5-year-old son likes to dress up in frilly pink outfits and bling.

I hoped to see a few pictures of little boys dressed up like Prince William, Prince Charles, or at least Prince Charming. I didn't even get Prince Valiant. I'm glad I didn't see any dressed up as just Prince. 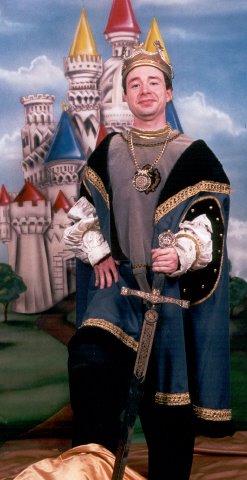 Parents of America, we have a serious problem. We have neglected to nurture the male equivalent in the royal hierarchy to the point where some young boys would rather wear dresses to get in on the culture of royal beauty and pampering. Don't blame it on Disney -- the studio has given us plenty of princes, including The Prince Of Egypt, Moses.

I've heard the explanation that young boys are more interested in superheroes than sword-carrying nobility. Perhaps, but it leaves few options for the young aspiring gent. Last Halloween, how many princess dresses did you see at the local costume place compared to tunics and wooden shields? We can't honestly make the comparison if we're not putting forth effort to give kids a choice.

I did another search: "boys who want to be knights." Again, disappointment. I found links related to the psychology of saving modern-day damsels in distress, but nothing to encourage the youth. The irony is that knights began their training at age 7, learning both chivalry and swordsmanship under the tutoring of a lord or knight. I found online classes for how to be a princess. Zilch for being a prince.

As a historical re-enactor who loves to dress up in knee breeches, stockings and a tricorn hat, I fully realize I am speaking to you from a biased perspective. I know my love of historical dress and manners are outside the norm. But that doesn't make it any less unfair for young boys who don't see themselves as Superman, Batman or Spider-Man.

I have this sinking gut feeling we don't see our media pushing a male equivalent to princess culture because it's too sissy. Take a look at so-called "meterosexuals," those men who take on characteristics that make people think they're gay when they're not. The way our culture is trending, it's acceptable to be perceived as gay. But woe to those seen as straight and sissy.

I'm not letting young princesses off the hook either. So much of the culture is material and self-serving. One mother told me about how she and others work to educate their daughters about the differences between Disney princesses and GOD's princesses -- GOD's princesses work to serve THEIR KING.

The homeschooling and historical groups I've been blessed to participate in are breaking this stereotype with a vengeance. They are fostering the development of young ladies and gentlemen without giving a toss about what the world thinks. The parents who make up these groups have instilled within their children that manners, kindness and respect are not archaic or sissy, they're what GOD asks of us.

I did one more Google search: "manners classes for kids." At last, sweet chivalry.

But I still want to see more kids in prince costumes.
-- Christopher at 12:01 AM