I was expecting a heated battle on the first day of the First Manassas 150th Anniversary skirmish. I didn't know that battle would be against my system.

Everything is looking up. I have a few hours of decent sleep on my side, some breakfast, and now I'm out the door in the rental car with an 18-pack of water for my fellow Southern compatriots of the 2nd Virginia -- the 1st Virginia in a special role for this occasion. But I'm going to have to park at a satellite lot with the spectators, given that re-enactor parking is reserved for those who got to the site at the crack of dawn -- and I needed that sleep.

I am dressed for battle: wool shell coat and pants with suspenders, shirt underneath, kepi on top, stiff leather brogans on the bottom. I'm not lugging a gun or other equipment; I've sent those on ahead with other gear through the courtesy of a brother in arms. I'll strap it all on when I get to camp.

That camp, I soon find, is going to be a hike, a shuttle bus ride, and then another long hike. I anticipate the leg work. I anticipate the muggy heat. But it's morning, I think, and the worst of the heat or humidity isn't here yet.

I make it to the shuttle bus at 8am, lugging the 18-pack of Aquafina all the way from my car to the bus seat. "That guy's got the right idea!" a staffer shouts to me on the way there. I'm tired, but it's nothing I can't handle. And now I'm in an air-conditioned bus, and I don't think the rest of the journey will be all that hard.

I step off the bus with the gaggle of spectators and a couple of fellow re-enactors, and then the hike really begins. What I figure will be a short hike through the battlefield to the camp becomes a long hike around half the perimeter of the battlefield, after I realize the bus can't stop any closer. Now I know why so many spectators are walking. But they're in shorts; I'm in wool. They're carrying maybe a chair, or a backpack. I'm lugging that case of Aquafina.

As I trudge through the morning march, the humidity attacks. I shift the water to more comfortable positions. A kind gentleman offers to carry one end of it for me. Then a lady offers the same after I make it past the battlefield bleachers and the food vendors. I have to pause. I have to rest.

Now, where are the rest of my fellow soldiers? I've gotten a location, but I need to find it. I plod on through the outskirts of the Yankee camp, where troops are already forming up and drilling. I don't like the looks of this. I can't be late. But I have to stop and rest while bottles of water fall out of the shrink-wrapped case as I soldier on. I puff. I pant. But I'm gonna make it.

I get to the crossroad where I think I'm supposed to be headed and encounter a provost.

"Do you know where Col. Scott's battalion is? Second Virginia?" I ask.

"What brigade," he answers.

"I think they just moved out."

My heart sinks, just as I'm sinking to my knees to regain some strength. But soon a friend spots me.

"Great! We'll put that in the cooler and get some fresh for you."

"I need to cool down -- now," I say, sinking to the ground. Fellow soldiers take a look at me and see this is more than just a water-bottle job.

Within moments, a makeshift medical triage is placing ice on my forehead, down my neck, on key arteries, and anywhere else they think I need it. Someone delivers a bottle of Gatorade, and I begin gulping it down.

"Keep holding this," our medical expert tells me. "Let it stay on your arteries and cool your whole system down."

Unlike four years ago at Picacho Peak, I'm not nauseous or sick -- just way too hot, and probably way too tired. As I sit and soak up cool, another familiar face appears in the corner of my eye.

"Christopher, are you all right?" the Sergeant said.

"You have to get acclimated to this heat. We've been here for three days, and we're still getting acclimated to it. I don't think you should go out today. I know it's not fun sitting out, but it's not fun either if you're on the battlefield and you overheat."

Others agreed. "They've been taking people away in ambulances."

So day one will see me on the sidelines instead of the battle lines -- Picacho Peak all over again. I really should be in better shape, I tell myself. But I thought I was doing all right for awhile.

The only thing I will shoot this day is a pocket camera, capturing HD video of my 2nd Virginia compatriots as they come to the aid of Stonewall Jackson and the Confederacy. At least 1,000 people, likely more, are watching from the sidelines and the bleacher seats -- or under them -- as the Blue and Grey engage in what the public-address-system narrator calls a "gigantic rugby match." One side pushes, the other pushes back. Reinforcements come in. Lines advance. Lines retreat. Muskets crackle and pop in a chorus against an aria of artillery fire. More than an hour of this, and haze is all over the battlefield.

"You are getting a good idea of what a real Civil War battle would look like," the narrator observes for the crowd. "Multiply the sounds of the musket fire by four and you'll get an idea of just how many were out there." I know thousands of re-enactors are involved in this anniversary skirmish. I forget the exact count. But my eyes are trained on finding the 2nd Virginia. For most of the morning, they've stood and waited to go on, doing their best to stay cool and hydrated, with their jackets off until showtime. They're going in the second half of the battle -- a long time to wait, but worth it in the end. 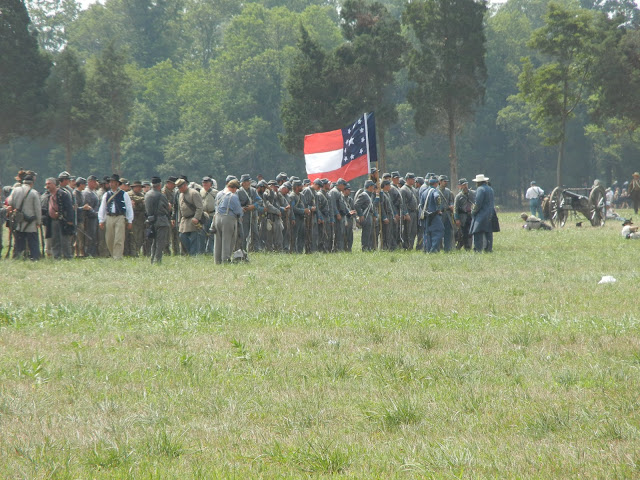 From afar, I pick them out on a hill, as they blend in with the rest of the soldiers. They advance, fire, advance, and fire again. Historic combat is not for the impatient. I watch as they push to victory. Maybe they don't "give them the bayonet," as Jackson famously quoted, but they look sharp in battle from where I can see. And I wish I was with them, marching and firing, and savoring the victory. I wish I was praying with them afterwards, thanking them for GOD's protection. I can pray on my own, anytime. Among friends, however, the spiritual experience rises to another level.

I capture a few more pictures of them thanking the crowd before heading back to camp. All around, people ask how I'm feeling. Better, I say, but I'm still disappointed -- disappointed at not going out with them.

"You'll be with us tomorrow," my Colonel reassures. "Shouldn't have worn that coat and made the march on the double-quick."

"I had the water with me, too," I add, owning up to another tactical mistake. "But I didn't want to come into camp without helping you guys. I knew you'd need it."

"You were carrying water?" another soldier asks.

They are grateful and appreciative, my fellow Confederates. They can sympathize with my disappointments and still encourage me on to victory. They are living life in the right perspective, loving the moment but not succumbing to it. They know they are not merely here to fire muskets. None of us are. And they are fighting their own battles against the 100-degree sticky heat.

"We're getting to to point now where you were this morning," one tells me.

Soldiers depart for cooler quarters after the camps are closed to the public. The gentlemen play cards while the ladies converse. The commanders sip a few light refreshments in honor of a successful campaign.

Our talented dulcimer player hammers out "Ashkotan Farewell," and I slip into a solo waltz, wishing Madame were here with me to see it, eyes tearing over this tale of longing and love. I still have something left in the tank for a dance.

"The question isn't, 'How did they do this?'" the battlefield narrator observed earlier, "but, 'Could I do that?'" I'm still not sure. Union, Confederate, Yankee, Rebel... allegiances don't seem to resonate on this day. What awes us is the stamina and bravery, the horrendous heat eclipsing the greater truth of men willing to die for their families, their livelihoods, their freedoms, and their nation.

Re-enactors get up at the end of the day and go back to their other lives and times. But within them -- at least the ones I march with -- is a deep reverence for the original people who fought this fight. It extends to the people fighting now, and those who will be in the next battles. It is patriotism by doing, supporting the troops by taking up the arms and tactics of their most celebrated confrontations. Appreciation flows from connecting with at least a tinge of the fear many people will never know.

"This is the big show," our commander observes about the size of this re-enactment compared to others we've been in. It's the Major Leagues. But we all know it's no "show," and it's not just for show, and our continuing orders are to make sure everyone who sees us realizes that in the end.
-- Christopher at 2:26 PM