The California Diaries - Day 2: Getting The Picture At Yosemite 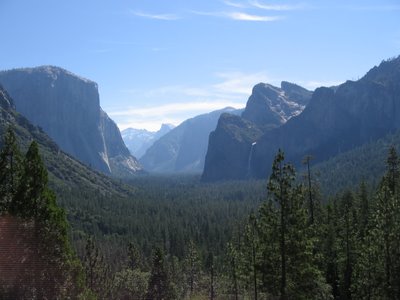 I’m really not awake until I see the view of the Yosemite Valley. Now my eyes are open, marveling the trees and mountains that lead off into the hazy distance, as if the Promised Land lies beyond them. I could spend all day here wandering in the wilderness with my eyes and two cameras. 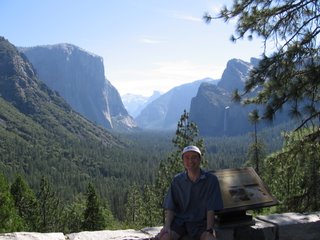 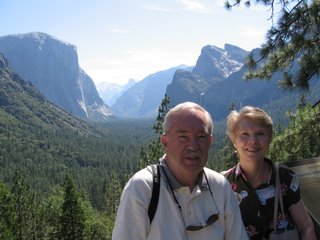 I would have plenty of company and plenty of lenses following me around. More cameras are at this particular pullout than at a presidential news conference as tourists take turns busting off shots and the obligatory group photos. Mom gets a request to shoot a couple of shots.

Down the road stands El Capitan, accompanied by the whisper of tumbling water from Bridalveil Fall. 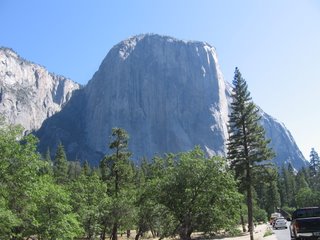 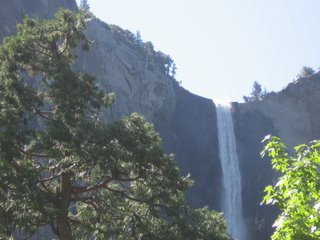 “Well, so does Clint Eastwood.”

People are pulling over again, whipping out cameras and camcorders. My Sony Digital8 and my Canon PowerShot A520, thy rod and thy staff, they comfort me. But Dad’s heavy artillery, the Mamiya 645, won’t fire off. This time, it’s not the crank; it’s the battery.

We get our first glance of Yosemite Falls, more spectacular than what I just came from.

Dad switches to the Nikon 8008 35mm SLR, and while he fools with that, Mom and I are off to the foot bridge over the Merced River, walking down the bike path as waves of cyclists pass us by, forgetting they need to show a little speed restraint on a shared pathway.

The river flows briskly but not raging, enough to draw several rafts along without paddling. Mom is convinced she wants to rent one. I wonder about the three of us in lifejackets playing Row, Row, Row Your Boat while trout swim beneath us in the clear water.

Dad catches up with us. He’s doing better now that his Mamiya has come back to life following a battery jiggle. He’s enjoying the scenery so far but lodging one objection: “Too many people.”

“You guys are stopped on an active road! Please step aside!” yells some guy on a bike as we walk on the shared foot-bike path back to the car, obviously not a park ranger. He’s riding at the front with three people behind him, barreling through like he’s Homeland Security. How I would love to throw a tire iron into his front wheel right now and marvel at the resulting physics.

A stop at the Visitors’ Center is next, giving us some time to poke around in the Ansel Adams’ gallery, get cooled off a little and get some lunch.

Mom suggests renting a raft and Dad doesn’t seem enthusiastic, especially with him lugging around two different cameras and three different lenses and having to protect them from getting wet.

“What would be the point?” he asks.

“The fun of it,” Mom responds.

It’s time for a hike. The roar of Yosemite Falls lures us in, and it’s not more than half a mile before we stand on the creek bridge, in the wonderful wet mist alongside dozens of tourists. Just a slight change in the wind is enough to reward you with an extra helping of water vapor. 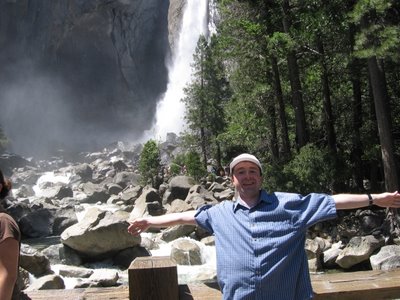 Mom and I climb up the rocks, slipping a little but getting an extra dose of the cool spray. Here’s another place I wouldn’t mind staying all day.

The walk to Mirror Lake is three miles. Dad’s doctor says he needs to get 10,000 steps a day. So we step to it, through the alternating dark and light of the woods, spotting a chipmunk or two and passing a few others. We find another stream, one with water clear enough to bottle and sell.

I keep wondering what the heck I’m going to do if we run into a bear, besides run. The more we walk, the deeper into the woods we get, and I’m thinking the lake has to be just up the way. Eventually I spot a glint of civilization and the silver shine of a row of parked cars. We’ve hiked all this way to get to a parking lot.

The crows are laughing above us.

To be sure, the lake is still up the trail. But this is where we get off. It’s after 4 in the afternoon, and it’s time to get rehydrated and back to the car.

Dad puts his gear in the back, only it’s taking a lot longer than it should. What should be a two-minute job blossoms into five minutes and then ten. Turns out he’s missing something.

“Two lens caps lost. I hate it when two caps get lost.”

He’s been poking all over the back of the car, looking for these two lens caps while we’re waiting to get on with it.

“Did you check your pockets?” Mom asks.

“Yes I did check my pockets,” Dad replies in that tone of annoyance he used to use with my brother and I when we were kids. “Give me credit for a little bit of intelligence. Not much, but a little.”

He keeps going through stuff in the back. Good grief, we’re never going to get out of this parking lot.

“You didn’t leave it at the creek up there?” I inquire.

Eventually he finds the caps… in his camera bag… just like he’d put them there.

“Note to self,” Mom says with amused exasperation. “Must kill your father.”

We drive up to Glacier Point, and it’s the big picture, the money shot. That Mamiya gets a roll-full. 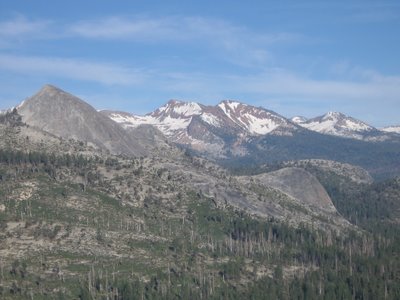 While Dad collects images, Mom and I take in the scenery.

“9,000 steps,” announces Dad’s belt pedometer, the talking one from Brookstone. He’s getting there. The goal is in sight. 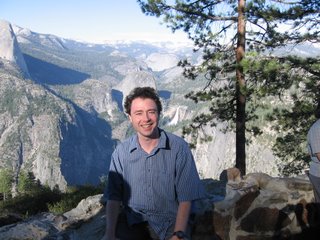 We spend about an hour wandering about the various views. I’ve ditched my cap back in the car, and my wild curly hair doesn’t want to behave for any pictures. Not that I care, anyway.

The sun sets into the trees as we make our way back to the hotel for the night. Evening fades into a deep dark night as we roll back into Oakhurst. Again, the passing trees nearly lull me to sleep in the back of the car.