Our family does not go out on the road without bringing back goodies. That goes for the kids as well as the adults. The Royal Grandmas and Grandpas were all too willing to drop a modest amount coin on the grandkids -- not ever more than $50 as I recall -- for souvenirs.

What did I buy? Things that would rarely identify your servant with where he's been -- although I did splurge for some Canadian playing cards that one time in Niagara Falls. 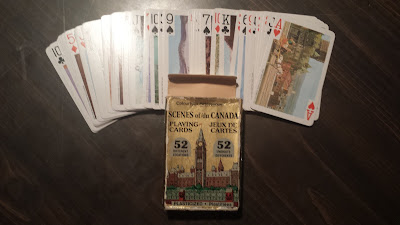 But while I was in colourful New England, I also had to have the latest card game from the makers of Uno. 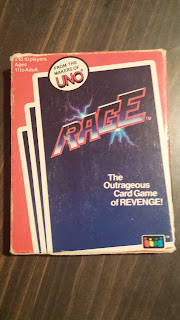 The Queen Mother or Royal Father would also occasionally kick in something for your wee servant for parity if they were buying something for my brother. He could have an expensive eye. We saw it on a visit to The Bear's Pause in Meredith, New Hampshire (sadly, now defunct). Brother Michael had his heart set on a large astronaut teddy bear dubbed "Cub Canaveral," cute and complete in a spacesuit. He ended up getting it, but legend says not without some pining. So the parents had to buy a few little things for the other son to even things out. Exactly what, I forget.

Forgettable junk made up a lot of what I picked up on the road. How do I know? Because I can't remember it, save for a few items:


The Queen Mother takes the crown for the most provocative t-shirt ever. On our first trip to New England, she picked up a shirt with a frazzled fish that said, "I got scrod on Plum Island."

We had a lot of leeway in our trinkets, but the don't-spend-it-all-in-one-place rule applied. So did the don't-spend-it-too-soon rule. Brother Michael wanted a bandana one summer. We had to talk him out of it because he wanted it from a gas station outside of St. Louis. Wait 'till we get there...
-- Christopher at 12:01 AM