Smile For The Camera

One of the rituals of going to Colorado is getting an old-time photo taken somewhere.  Unlike nowadays, where the studios can often throw something over the front of you, getting dressed up required a lot of fuss and some suspension of disbelief. 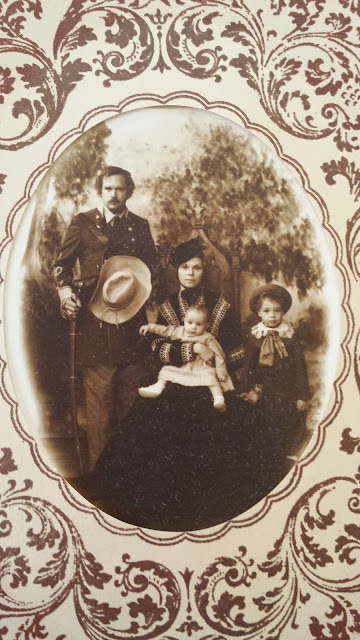 This was supposed to be a Civil War portrait, but I find a few quirks.  Note that your wee servant on the right looks more like Little Lord Fauntleroy than a soldier's son.  The Royal Father insists he was a Confederate, but that's an awfully dark shade of grey.  I could easily claim he was a Federal.  The Queen Mother already looks like she's in mourning for him.  Brother Michael -- on her lap -- knows nothing of this spectacle, including the fact that he's kinda-sorta wearing a dress.  That's period correct for wee lads, by the way.  Mom's hoopskirt covers my legs, but I wonder if I'm wearing shorts... or knee breeches.

Let's move ahead a couple of decades on the timeline and about four years in real life: 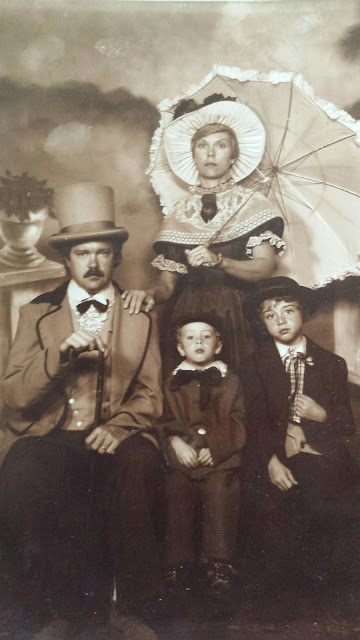 I seem to recall Dad calling this look, "The Banker."  That hat makes him look more like Willy Wonka, in my opinion.  The Queen Mother looks great with the parasol and hat.  I don't know if I like my outfit.  I can't tell about Michael.  I just remember the first time we tried this sitting, Michael was fussy and the photographer could find the right size shoes for your servant.  Not that it would've mattered a whole lot, as you still can't see my feet. 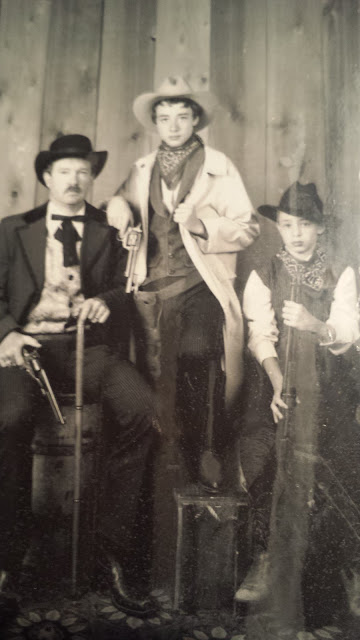 Now, 1883 via 1988.  Here's my favorite of all of them.  The Queen Mother was feeling ill this day, so she was not a part of this photo.  (Or she probably didn't want to get into another hoopskirt or bustle dress.)  I thought that duster looked great on me.  The Royal Father is locked and loaded.  The photo is a little dirty, so it's hard to see, but with a shotgun in his hand, Michael looks like he just shot somebody.  Priceless.
-- Christopher at 12:01 AM