Toby, What Are You Eating? 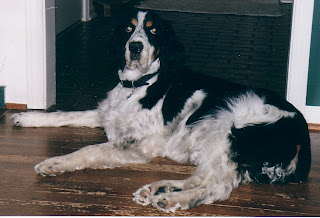 As I have told you here previously, dogs can eat death like it's a Milk-Bone. While I consider my grandparents' Dalmatian Sparky as the all-time champ, my Dad's dog Toby comes in a close second.

From nearly the time we brought him home, the Springer Spaniel puppy showed he would eat any unsecured article, starting with my shoelaces. On his first morning after his first night, I heard growing and knocking in the kitchen all the way into my upstairs bedroom.

"That was the dog throwing things around," Mom explained, probably because Toby couldn't eat what he was throwing.

A few mornings later, floating up to the sanctity of my bed...

That would be the dog trying to lick the kitchenware as Mom opened the dishwasher -- not the second rinse she had in mind.

A few days later, a neighbor came to the door.

"You know your dog's eating your tree?"

"Yeah, he was shaking it pretty hard!"

The young tree had already lost one of two thin branches to Toby's appetite. I reluctantly told Mom, and she grumbled something about killing "that dog," as she headed down to the basement. She brought up a tree pruner, and I figured I better follow along to prevent a possible dogicide.

"The vet says Toby's his favorite Springer," Dad gushed. "He says the other ones bite."

"So does Toby!" I corrected.

Boy, did those teeth get cut. When he wasn't howling in the dark of the basement, he was going to work on the clutter. His preferred meal: my dad's magazine collection, something Mom had been politely nagging him to do something about -- "I can't believe your father is a magazine saver!" Toby shredded whatever he got his paws on, and chewed the rest. For dessert, he ate one of Dad's golf shoes. We should've just let him have the other.

"Toby, if you eat that wasp, you're going to be in a world of hurt," Mom chided as the puppy eyed a flying insect that had just crawled into a crack in our deck. He didn't care. He would snap at moths fluttering around his nose, thinking he could catch one. I think he did, once.

The dog's appetite subsided as he grew up, but he still had a penchant for teething. We got him a large, supposedly indestructible bone for Christmas, and he took to it after shaking all over the front room.

"I tell you, those bones are too big for him," I said.

"No, he just likes to play with his food," Mom observed.

When my brother Michael got a pet rabbit, I feared hasenpfeffer might be on the menu. When we let the bunny out of his cage to hop around, Toby chased after it like he was on the hunt. Then the bunny would growl at him -- yes, I said GROWL -- and Toby would turn and run until he worked up the nerve to corner the rabbit again, and the cycle continued. Toby went gourmet in his twilight years, feasting on boiled beef and rice to ease his stomach. He would whine as the dish sat in the oven, not waiting for it to cool down. More than once, Mother just let him eat it steaming hot.

Out of all of this, we never had to take him to the vet for something he ate. The dog had a cast-iron stomach like so many others. I can't explain why dogs have such a high tolerance for junk diets. Just put everything out of reach. And if you have a cat in the house... well, let's not go there.
-- Christopher at 12:01 AM