What Really Happened During The Obama/Brewer Summit

The "cordial" discussion didn't lead to any major breakthroughs. We do not have an authorized transcript for you. However, one of your Lightning Round staffers managed to overhear the conversation and slipped us the following account:

"Bummer about the Suns."

"Well, you know, Kobe Bryant. But let's get down to business. You're sending 1,200 National Guard troops to the border. I really need more, like 5 or 6 thousand. And we could use some drones. And that border fence needs to get finished. We're taking bets at the Capitol on whether the Freedom Tower is going to get built before it's done."

"How can I not? You guys know how to spend money. But I need more people, more boots guarding the line."

"To plug up the border, right? Sort of like a 'junk shot' thing?" 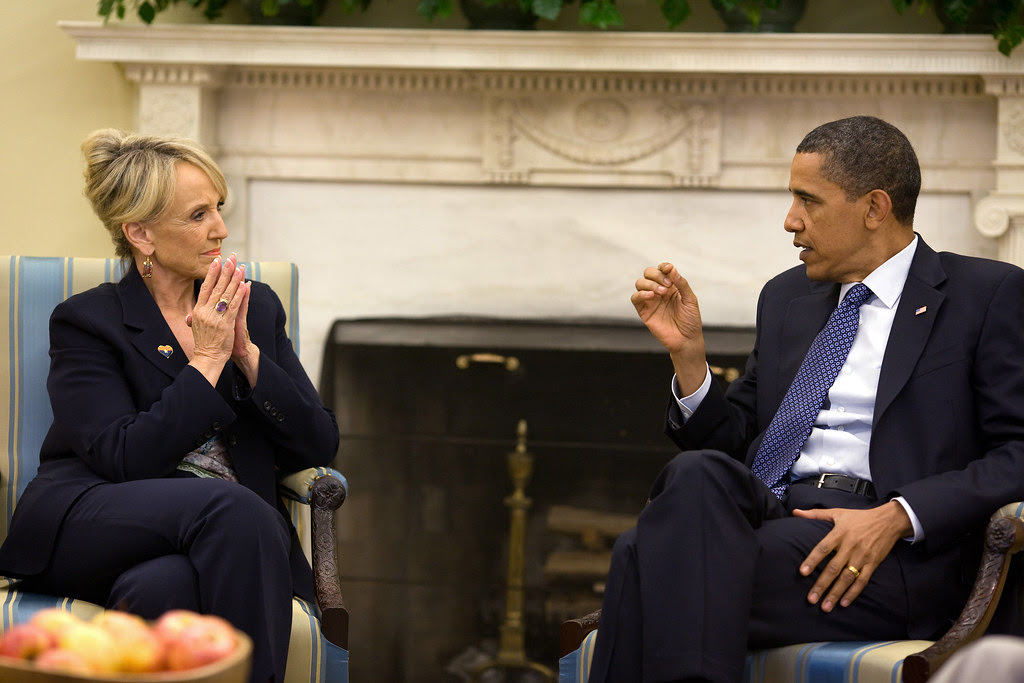 "Well, yeah. Come to think of it, maybe if we dumped all that oil along the border, it'd be too gooey for the illegals to get through."

"You'd have to ask BP about that."

"I'll put it on my agenda. Oh, and thank you for working me in around Paul McCartney."

"You're welcome. For the record, I just want to reiterate that the only real solution to this is immigration reform, and we're working on that."

"Yeah, that health care bill was a serious you-know-what. I've only got enough in me for one fight a year. And it's an election year. Speaking of that, what's up with this lawsuit against health care reform?"

"I dunno. You tell me what's up with this lawsuit you're going to file against SB1070."

"Touche. But I can't really talk about that, since it's all up to Justice."

"It's nice that you got people to do that for you. My guy Goddard won't sue for anything anymore."

"Have you tried some friendly persuasion?"

"Fine then. You thirsty?"

"Are we having beers?"

"Anything you want, Madame Governor. I had the guys bring in a case of Sonoran 100."

"Thanks, but I'll stick to the water for now. I want to be clear on this last point. We wouldn't be in this mess if the Federal Government had been living up to its responsibilities to secure the border. I have police and sheriff's departments who are having to deal with drug and crime problems because the immigrants keep on getting through."

"I understand your concerns, Madame Governor. But as you know, asking the feds to do something is like asking Heinz to make fast-flow ketchup. Government moves at the speed it does because we can't move any faster. Why do you think health care took so long?"

"I figured as much."

"Look, I got another appointment, but I thank you for your time."

"Nah, something else. But I want you to know that we ought to be working together on this."

"I'll certainly try, Mr. President. And I invite you to come to Arizona one of these days and see the border for yourself. You're not boycotting us yet, are you?"

"No. Michelle loves the spas. Oh and one more thing."

"What's the deal with your hair?"

"This? Oh, I thought I'd try that Rose Mofford thing."