Making A Scene Behind The Scenes

The news director of KOCE-TV -- PBS station in Orange County, California -- sent out a memo to his staff complaining about a rogue employee at the Orange County Register who keeps "performing antics for the camera" in the background during interview segments from the paper's newsroom. His latest transgression: a finger up the nose -- and it was not a scratch. That employee, according to the L.A. Observed blog, is now taking another finger -- one pointing toward the door. 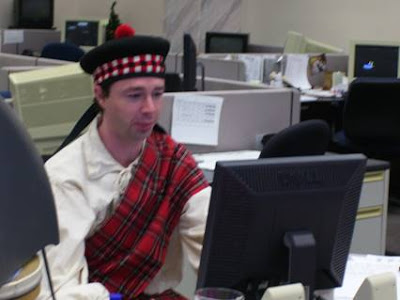 With our set design at KOLD News 13, cameras are always pointing into the newsroom. Thankfully, nobody has been caught with an offending digit, although one reporter (who shall not be named) was once caught wearing a plastic bucket on his head after he'd used it to illustrate a story on child drowning dangers. On Halloween I have to displace myself from my regular desk to prevent viewers from seeing a colonial soldier or a happy highlander behind Mindy Blake's shoulder, necessitating some unnecessary on-air explanation.

Once in a while, I'll wear some historic hat into the newsroom before a journey into the past, and I have to remind myself to remove it before the cameras go on. I forgot to take off my tricorn on Election Night a couple of years ago, and a friend later told me he knew I was working when he saw the distinctive triangular crown over an anchor's shoulder.
-- Christopher at 11:32 AM