The Word Is AFFECTATIONS

"Let me give you my thoughts on affectations," said a friend of mine as he taught a class on 18th Century English dance. He stated flatly and matter-of-factly that various showy displays of the hands -- such as raising a free hand high during a hands-across figure -- were not fashionable. Instead of portraying courtly demeanor, they would bring about awkward reaction from others. Ridicule was not out of the question. I got a similar message from books on 18th Century dance, which dissuaded deep bows among gentlemen and the spreading of skirts among ladies when curtsying. "Oh just take all the joy out of it," I muttered.

I am one of those people who likes deep bows and encourages courtly curtseys. I love holding a free hand high every so often or shouting "Huzzah!" during a circle-round. I likely break the rules the English dancing masters taught, and then I break them again when I teach Colonial dancing to young people and subtly encourage them to embrace their inner regality. They're not wearing powdered wigs, knee breeches, tricorns or polonaise gowns, but I can at least help put their minds in the right frame with mannered and yet festive gestures.

Still, I look at how I danced during my first Williamsburg ball, and I have to note my gestures are exaggerated.

I'm all in the dance and then some. I need to refine my manners. Still, I was able to get some ladies to follow my lead with free hands high during at least a couple of dances. I have to be thankful for small victories. 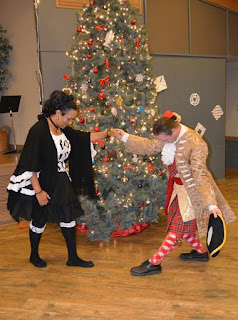 One friend has also told me not to bow my head as well as my body when giving honours. I end up doing it anyway half the time because.... well, it's reverent. I always thought it unfair the ladies were taught to bow their heads or cast their eyes down when curtsying while the gentlemen were not expected to do the same. I also see myself as giving dual reverence, not only to my partner but to THE LORD OF THE DANCE. The other ladies don't mind.

I say if you can be regal, be regal. It's the closest thing you'll ever get to living in a fairy tale or royal court. Or Pride & Prejudice.
-- Christopher at 12:01 AM