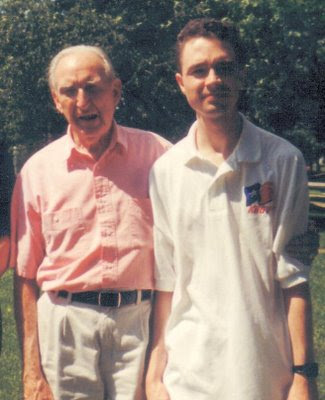 I never asked my Grandfather Francis what he did in World War II. At most, I knew he was stationed in Egypt, and he told me about the incessant grumpiness of camels. He used to show me a Bible he'd bought in Jerusalem, and I thought it odd it was written in English instead of Hebrew. When I explored ham radio and teletype over the shortwave bands, he used to tell me about how used logarithms to figure out how to tune in a signal.

After he passed away in 1999, I learned the story I wished he would've told me. He had been involved in cryptography, working with the people who had the Enigma machine to decipher enemy secrets that would guide Allied Forces to victory. My dad says Grandpa couldn't talk in depth about the specifics of his service, even 50 years after the fall of the Third Reich. Still, I would have liked to have given it a try, chronicled it somehow. Perhaps there was a memoir in it.

Instead I have to be content with the memories of a chilly December morning after Christmas, standing beside his his casket, when the VFW post handed an American Flag to my parents, and a gun salute ripped apart the silence. I knew Grandfather Francis as "Grandpa," not the war hero. That's my lasting regret.

I'm grateful for the Veterans History Project and similar efforts to collect the words of our World War II veterans before they're gone. They're succeeding where I failed. The government estimates, but cannot prove with certainty, 1,100 WWII veterans die every day. The exact number is irrelevant; they won't be on this earth for much longer.

I can only pray Grandpa can see, from wherever he is, that his eldest grandson dons the uniform of Patriot soldier every so often and tries his best to inspire those around him to love their heritage and their country as much as he did.
-- Christopher at 4:54 PM