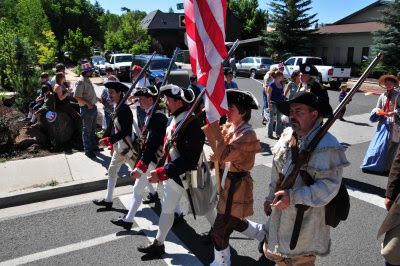 To my left and right, throngs of people pack every inch of sidewalk space in downtown Flagstaff, waving their flags and snapping pocket camera photos. They cheer for us. We cheer for them -- "Huzzah, Huzzah!" We're moving on the double-quick, the parade organizers having kicked things off on time.

Then two men, advanced in years, stand up and place their baseball caps over their hearts in reverence as the lines of re-enactor Continental, Confederate and Union soldiers march past.

"It's an honor to represent them, isn't it?" our General observes with a smile of admiration. 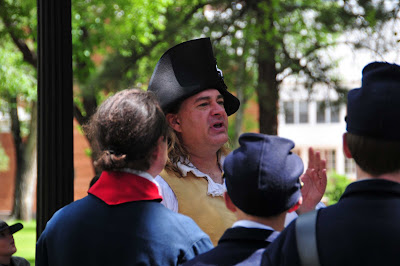 Later, in a moment of prayer and reflection, he asks, "How do we glorify GOD?" It is an open-ended question, with legions of possible answers. But it is also a question that delves deep into the heart of our souls and leads to another query: Why are we here?

Why am I here? What makes me get up at 4am and drive 300 miles to spend less than one hour marching in a parade? In that heavy regimental coat and tight set of breeches? How did I end up with this group now standing around the Washington Tree on the campus of Northern Arizona University?

The simple answer is because re-enacting uplifts me, and it uplifts others. It pays tribute to those who had ten times more guts than I currently possess. Simple as it is, though, that explanation just does not suffice, not when our leader asks us if we have ever thought about why GOD brought us into this world on the dates we know as our birthdays, and not some other time. As Esther 4:14 says: "...And who knows but that you have come to royal position for such a time as this?"

Some friends have asked: "Do you ever think you were born in the wrong time?" It is not an easy question to brush aside, given my love of living history, especially from the 18th Century. Yet if I answer yes, I say GOD has made a mistake, and HE does not do that.

A minister at my church has cautioned me not to get frustrated trying to figure out GOD's specific mission for me. "GOD wants us to love HIM, serve HIM, and obey HIM." Beyond that, I'm told, GOD gives us a lot of latitude and freedom.

But how do I explain all of these life experiences as latitude... or chance?

So GOD didn't tell me where HE wanted me to go. HE didn't issue a mission statement with my birth certificate. But HE did point me, nudge me and reorient me along the way, even in those fifteen or so years I had drifted away from HIM. HE wanted me back.

A lot of us would say we do not want to be "used." But I know GOD is using me, and that's amazing and humbling to the point of misty eyes. HE chose me to do this, be this re-enacted soldier, this 18th Century gentleman, this brave and merry Highlander, this humble Puritan and all the other historical personas. HE chose me to love a form of dance many people I know would find constricting and unimaginative. HE gave me this affinity for bowing to people. HE put those desires within me, because I know without a doubt they didn't come from within my own heart. Or maybe they were trapped in there, yearning for liberation.

So in our time of prayer, I offer thanks out loud that GOD has chosen all of us standing around the Washington Tree. We're re-enacted soldiers, I observe, but we're still soldiers all the same, with our mission to carry out GOD's work on this earth. We're so glad to have that mission, realizing that just as much as we believe in GOD, HE believes in us. 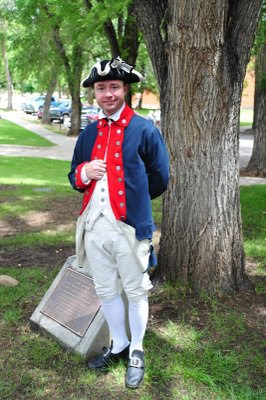