The Kids Are All Right

A tale of triumph over shortcomings on School Day at the American Heritage Festival.

Two Continental Soldiers will have to do the work of four or eight today.

We are on the battlefield, George Washington to my side along with our Sergeant and two buckskinners. We have no standard bearer. We have no French commander. We barely have any militia to help us. Across the field are our friends the Catalonian volunteers, transforming into the role as Brunswickers -- German regulars fighting for Great Britain. The Redcoats have vanished. 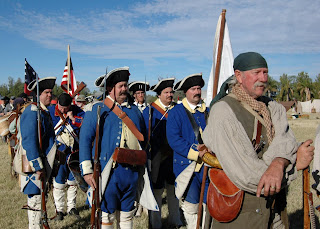 "We've got a breakthrough," Gen. Washington notes. An overflow of children is spilling out onto the battlefield in back of the Brunswicker artillery. They're filling in along the fence, out of the way, but not out of danger unless we take extra care.

Hundreds and hundreds of young spectators are in the bleachers and behind the rope pennant line. They are already rooting us on, cheering from the second we stepped onto the battlefield.

His Excellency is quick to encourage them, and never disapproving of their enthusiasm. We'll take the support. We'll take a few artillery pieces, too.

The Sergeant and I have just spent more than an hour answering questions from the waves of children roaming through the camps with their teachers and parents.

"Does that gun fire?"

"How much does that gun weigh?"

"Are you gonna get killed?"

A few of the youngsters carry papers with them, doing class assignments in the field.

"Describe the Continental Army Soldier," one reads to me.

"What do you see?" a teacher prompts. It's a good prompt for me to talk about my uniform, the red white and blue with the white weskit, breeches and stockings topped with a tricorn. "This was worn in the early part of the war," I explain. "Eventually soldiers would wear overalls." Not me. I prefer my breeches, even if they've shrunk considerably since the first time I put them on five years ago. A gusset sewn in by a kindly schoolteacher has relieved the tension and protected my circulation, even if they are a tad baggy.

As always, though, the children want to know about the musket: what it shoots, how it shoots, what I pour down the barrel to make it fire. If the colorful uniform doesn't attract them, the silver shine of the musket will catch somebody's eye in a flash.

"And it came from the French, along with this uniform."

It's a tip of my cocked hat to our friends the French, Le Comte and La Comtesse, manning their tent and explaining what their aristocratic airs have to do with the American Revolutionary War. Le Comte takes delight in showing the children his special cane, the one with the built-in spyglass. 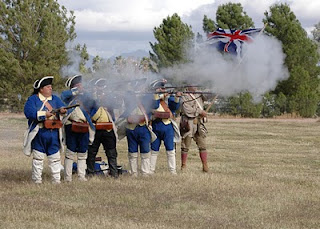 If we had it with us now, maybe would could spot the Brunswickers' weaknesses from far, far, away. Instead, we will have to be content to send our buckskinner militia forward to taunt and annoy them with a few shots before we advance and achieve the equivalent of a shorthanded goal.

BOOM! Their artillery fires first. We will wait to start our march until our cannons respond. One more boom and we're off.

I know the drill and I've done it many times. Tear open the cartridge, dump some in the pan, dump the rest down the barrel and come to the ready.

Nothing. Not even a pan flash. I've just put a new flint in my beloved 1777 French musket, and this is how it shows appreciation. "Misfire," I whisper.

I fake going through the motions again for the children. I need to ham it up. They're rooting us on and they deserve everything I can give them, but I don't need to double load.

Click. No spark. "I have a flint issue," I whisper. The kids don't notice, but I can only hope. I'm timing my actions to make it look like I fired, even if I didn't.

"We need to take a hit on this next volley," His Excellency indicates.

"After this next volley," says the sergeant. One adversary fires, but then he falls back. I'm still loaded and going down doesn't seem right now. Or perhaps I want just one more crack.

HUZZAH! An orange blast from the muzzle. One final shot before we move in on the Brunswickers and their guns. Somehow we've managed to take out their superior numbers. They're lying all over the ground, in front of the cannon, muskets by their sides. The children are cheering. Our mission is complete as we call for the dead to pick themselves up and dust themselves off. GOD Bless the Catalonians. They're willing to be our fall guys in the cause of liberty and education.

Unfortunately, I don't have time to stay and answer more questions from the children, having to change uniforms and leap forward 100 years to join my 1st Virginia compatriots for the next battle. Still a few crowd around me for high-fives and pictures as I leave the battlefield, eliciting a few healthy huzzahs. 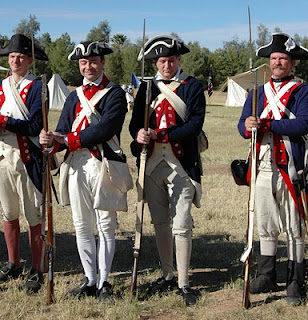 More Continentals would join me on Saturday and Sunday, improving our odds and evening the lines, but that fickle flintlock would continue to torment me with its clicking. I would fiddle with flints and muse about the lack of spark. Even Baron von Steuben couldn't solve my soldiering dilemmas, all the more reason I count my blessings among an understanding brotherhood of the Continental Line.
-- Christopher at 6:40 PM