The Free And The Brave - Part 1: School Of The Soldiers

Memorable and miracle moments from the 2009 American Heritage Festival, as presented by We Make History

From the journal of Private Christopher Francis, soldier of the Continental Line, recruit of the The 1st Virginia Volunteer Infantry, and Prancing Puritan.

“Are you willing to enlist in the cause of Liberty?” I ask.

Some of the first schoolchildren stand before me -- this Yankee Doodle Dandy soldier in the red, white and blue uniform -- puzzled.

“Do you think you can fire this musket?”

That they understand. Anything involving firearms tweaks their curiosity, and I can fill their cups many times over, starting with the priming and the loading, showing how I tear off the cartridge tip with my teeth and pour a little bit of powder in the pan before dumping the rest down the barrel.

“I pull the trigger and that sets off the charge in the pan, and some of that explosion goes through the touch hole -- I don’t know if you can see it there -- and sets off the powder in the barrel, pushing the musket ball out and hopefully into one of those redcoats.”

I motion to the open field in back of the line of canvas tents, where the British are practicing their drill and march. They have a precision that inspires the lackluster regimental. One or two occasionally collapse into the grass in deference to the children opposite them with the wooden toy rifles. 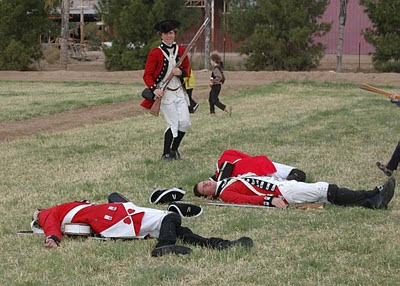 “They do a good job of falling down,” I note to a fellow Continental soldier during a spare moment when the young ones are enthralled with a leg-stock punishment device.

“For a shilling, we can hold them in place for you,” a Colonist offers the parents.

“For a little extra, we can also hang a sign around them that says ‘Insubordinate,'” I add.

The others on this School Day are milling about the Colonial camp, watching someone melt lead into musket balls or watching the ladies cook breakfast. The more adventurous are trying their skill at the game of Graces, tossing hoops back and forth to catch them with sticks. Across the way, the French Tent is up, and Le Comte and La Comtesse -- dressed in their lacy full court beauty -- are explaining to the wee ones why they are involved in this fray. 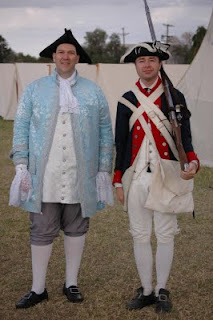 “Can we take your picture?” one visitor asks.

Whatever we say or do, the groups lap it up. I explain the musket spiel at least a dozen times to the kids who pass on through in their official polo shirts and name tags, more interested in the weapon than anything else they see before them.

“What rank are you?” a child inquires.

“I am just a private. But he,” I say to a redcoat who has just sauntered up to a fellow Patriot and myself, “is an officer.”

Lt. Radcliffe is casually drinking from a tin cup and thinking he’ll be the one to drop us in battle. He has that confident swagger about him, the product of somebody who has not tasted defeat, not even sipped it. A few moments later, we are all summoned to muster.

“This isn’t quite the Battle of Cowpens,” General Washington informs us. Cowpens, after all, didn’t involve our Spanish allies -- those proud and honorable men in the blue and yellow uniforms -- gladly adding to our numbers.

“Battle of Fountain Pens,” I jest.

“Or Pig Pens,” remarks the British commander, eager for a smidgen of levity amid his predetermined loss.

The gray skies let loose a shower, and children shriek and dive under tent flies. The outpouring does not last long.

“It’s a great day,” His Excellency observes. It reminds us all of Virginia and its sudden shifting skies. 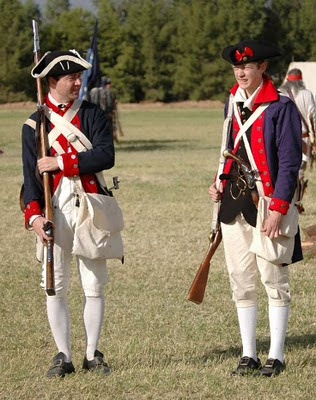 The shrieks and screams in our favor multiply as my fellow Continentals and I take the field. Young ones are eager for us to get out there, as the British are already pushing back our militia. The Catalonians have some artillery fire for support.

We advance on the British, greeting them with more cannon blasts and musket volleys. I worry about the light sprinkle in the air and what it can do to a flint. Even as something as innocent as a gentle November breeze can snuff out my sparks and leave me unarmed.

“Load and come to the ready!” General Washington orders.

My 69-caliber smoothbore’s hammer gives me as much fight as the redcoats, even after a good oiling. It resists the pull-back. But even with the battle-within-the-battle, I can still stuff a load down the muzzle in 20 seconds or less, which is the goal.

The orange flame of the pan stands out amid the morning grey. I don’t know if the load in the muzzle followed, but I don’t have time to worry about it. The redcoats are still advancing, all half-dozen of them plus their militia and musicians, and another load has to go down the gun.

“Aaaaagh!” screams a fellow Continental as he drops by my feet. I’ll make those bloody scoundrels regret it.

Three more volleys from us, and we’ve got them on the run. Even their artillery is no help now. We’ve got them running —- “CHARGE!” I am screaming. The children are hollering along with me.

Their general is left abandoned with three Patriot soldiers running him down. He offers his sword. “Disarm him!” I cry. But I wait for General Washington to handle the matter diplomatically.

“Your men fired at one of our ladies,” he points out, indicating the extinguished British officer on the ground: Lt. Radcliffe. So much for that confident swagger.

“It is fitting that his wig is unkempt.”

Later, I learn the full story. That swaggering Radcliffe felled a Molly Pitcher, to the horror of the Patriot cause and the boos of the children. But what that redcoat and the kids didn’t know was that Molly took the hit on cue, leaving her aggressor officer with a reputation that would add to his persona and probably elicit a few more playful boos and hisses long after the battle.

For the victors, though, it’s nothing but cheers. I march past the crowds of children, giving high-fives to anybody who can show me their hands. “Huzzah! Huzzah!” I shout as I slap palms. They come from everywhere in the crowd, running up to the safety line.
Everybody wants to be a part of a winning team, and no doubt some of the kids will be picking up a Charleville of their own one day and marching into the battle with visions of jet-smoke rifle fire and falling redcoats cavorting about their minds.

Advancing forward 100 years, it’s time to let the Yanks hand out a whupping to the Rebels in front of the children. My 1st Virginia compatriots and I think we’re beating the bluebellies back, but a detachment of their forces flank us and mow us down in good fun.

It’s a different perspective for one officer, now a private, right next to me in formation, not minding any of it.

“Did you lose your rank?” someone asks.

“No, just trying something different.”

He’s talking about more than just himself. Young men in the 1st Virginia Volunteer Infantry and our fighting friends the 1st Minnesota are stepping up to try out the ranks of NCO’s and officers. They are taking on more responsibility and a new learning curve for a position that our superior cautions isn’t as much fun. But the reward is a sharper edge in leadership, one that will seep over to everything else in life.

We’re reorganizing our Civil War soldiers into a battalion structure, in preparation for bigger things ahead. Multiple layers of leadership on the battlefield mean multiple companies and multiple commands repeated multiple times.

It’s easy to discern what’s coming when it’s said three times, but the challenge for the officers is making sure they’re in the right position to move: out in front of the troops, which means they scurry like squirrels into position out of their respective companies, or back from behind if we’re moving after firing.

The logistics of a simple advance can be head-scratching at times: the flag-bearers have to be in the center and the Captains have to be in front of their respective companies. They have assigned positions for everything—no walking about to survey the troops during a battle like some prize-fight referee. It’s an adjustment for everybody, even the privates who are learning new ways of falling into columns of twos and fours. It will all be worth it though, when we journey to Virginia once more.

My friends in time gather for a potluck Thanksgiving dinner after the children have departed. It’s the closest I will come to the real meal two weeks later, which isn’t real at all given I’m working between bites. I prefer it this way: breaking bread among the people whom I love and give Thanks for every day.

Several of those people express their thoughts out loud at the invitation of our commander, who thanks us once again for inspiring the hundreds of young ones we met today.

“I am thankful for our freedom,” a young girl says, “that I can do what I want.”
Several others share. I am silent. Part of me wants to speak out, but I don’t want to make a long speech. Something inside of me is telling me to hold my tongue, that people have heard enough of me, that I should instead hear from others.

But later, I open up to our leader in soft confidence. “This is my favorite of the three days. I am so thankful to be here for it.”